Jake Gyllenhaal and Anne Hathaway’s new romance, Love & Other Drugs, is arguably the sexiest movie of the year. Jake and Anne take their clothes off for three new EW magazine covers to promote their new movie. 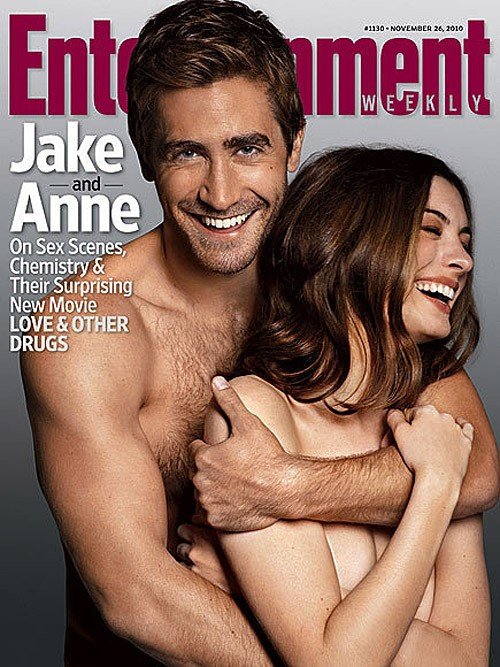 Photographer James White, who shot Gyllenhaal and Hathaway in New York, says the costars had an easy rapport.

I thought they’d be a little more tense about it than they were, but it was surprisingly low-key. he says. I guess after making a movie like that with each other, it’s not too big of a deal.

During the interview, Gyllenhaal and Hathaway (who played husband and wife in 2005’s Brokeback Mountain), dish on their intense sex scenes in the film. There is that revoltingly embarrassing moment when you have to take your clothes off in front of strangers, says Hathaway.

I mean, I don’t go to the beach in a bikini for a reason. So I thought, Okay, I’m going to be in control. I’m going to do everything properly, disrobe at the last minute, and in between shots get the clothes back on. But then I found that every time I put my robe back on, it rubbed all the body makeup off, and that added 20 minutes to filming. As with all things in life, the second you stop making it about you and you make it about everyone else, it just got, dare I say, fun.

Gyllenhaal also spilled one interesting bit of trivia about the tape that kept certain modesty-preserving patches from falling off: It supposedly was the same tape that they used on Pirates of the Caribbean to keep everybody’s wigs on.

For more on Jake and Anne, including how they got in the mood to film their sex scenes, pick up the new issue of Entertainment Weekly, on stands November 19th.
popwatch.ew.com