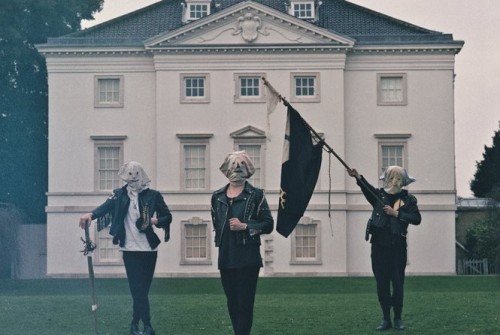 Whilst busy in the studio putting the finishing touches to their second album due out later this year, IS TROPICAL have found the time to get together with a few friends to record FLAGS EP, released on the 21st January 2013 on Kitsuné/Cooperative Music.

“In the weeks leading up to us starting work on the second album, we decided it would be a good idea to set aside some of the more electronic songs that were rattling around inside IS TROPICAL laptops and being fucked with in tour vans.

Amalgamations and cousins to some of the demos that will end up on the next release, ‘Flags’ was about exorcising some of these dancefloor-based demo(n)s so we could go on to work on our record with fresh ears”

“We’re sentimental; it’s not easy to just throw out an old mobile phone recording of six people playing the organ when we’re pissed. Riffs and melodies that wind up begrudgingly set aside during the songwriting process can turn into full tracks in their own right.

More importantly, it ended up being an opportunity to work with some of our talented friends and in turn get inspired by what they do (and maybe clandestinely nick a glockenspiel on the way out).”
istropical.tumblr.com
facebook.com/ISTROPICAL
twitter.com/istropical