The release date for IRON MAIDEN’S highly anticipated new studio album, THE FINAL FRONTIER, is now confirmed for Tuesday, August 17, in the U.S.

The new album artwork has just been unveiled on their website and was illustrated by Melvyn Grant. 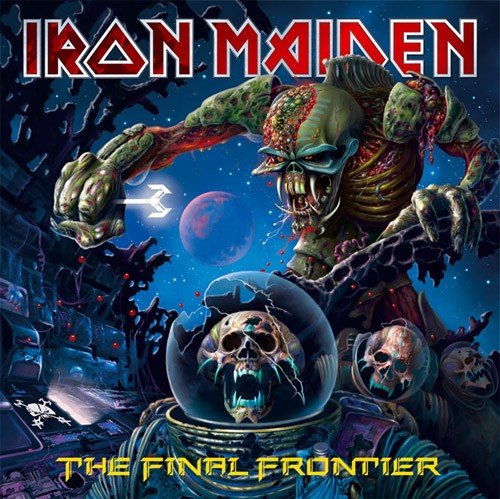 To mark the occasion, the band has made special arrangements for one new album track, “EL DORADO,” to be made available worldwide as a Free MP3 digital download file with immediate effect via their website.

As we will be including it in the set of our Final Frontier World Tour, (which opens in Dallas on June 9; see full schedule dates below), we thought it would be great to thank all our fans and get them into The Final Frontier mood by giving them this song up front of the tour and album release.” 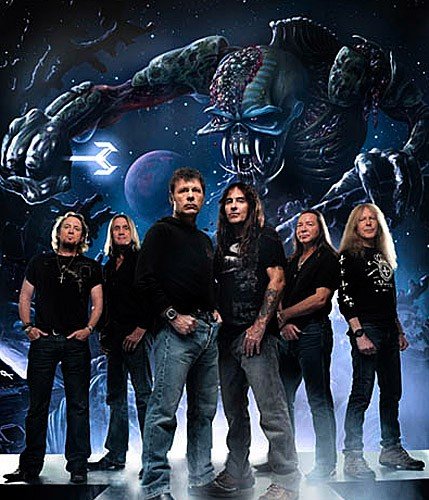 The band reunited with longtime Maiden producer Kevin “Caveman” Shirley in early 2010 at Compass Point Studios, Nassau, to record the album and then moved to L.A. to finish the recording and do the mixing.

Compass Point Studio is very familiar to the band; it was where they recorded the Piece Of Mind (’83), Powerslave (’84) and Somewhere In Time (’86) albums.

Dickinson comments, “The studio had the same vibe and it was exactly as it had been in 1983, nothing had changed! Even down to the broken shutter in the corner…same carpet….everything. It was really quite spooky.

But we felt very relaxed in such a familiar and well-trodden environment and I think this shows in the playing and the atmosphere of the album.”

Thirty years on from their eponymous debut album in April 1980, The Final Frontier will be Maiden’s 15th studio album, making a remarkable average of a new album every two years for 30 years and totaling over 80 million album sales during this period.

The Final Frontier World Tour begins in Dallas on June 9, with 25 shows in major cities across the USA and Canada, playing to an expected 350,000 fans or more.

Following this, the tour will shift over to Europe starting in Dublin, on July 30, to play a few selected major festivals and stadiums, finishing in Valencia, Spain, on August 21, and including a concert in Transylvania.

Says bass player and founding member Steve Harris, “We’re hugely excited about this tour. I think the fans will really like the brand new stage production and lights and we will also be debuting one of the new album tracks, ‘El Dorado’.

Our Texan fans will be the very first people anywhere to hear it live, so it will be interesting to see their reaction and how it goes down with the crowd on the night!

Eddie has changed a bit for this tour but is possibly the most outrageous one to date…I can’t say too much about him as I don’t want to spoil the surprise, but I guarantee he will scare the hell out of you!”