Pledge Music the leading direct-to-fan music company has announced plans for an intimate Q&A session for just 40 people with Jack Bruce to celebrate the successful conclusion of the legendary Cream front man’s recent Pledge campaign with the company. 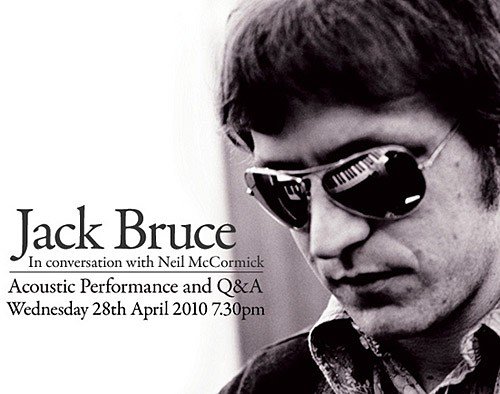 The hugely successful campaign, which offered followers the chance to be part of the release of a never-before-heard live album, ‘Jack Bruce & The Cuicoland Express – Live at The Milkyway’, alongside a range of amazing fan offers including exclusive memorabilia, merchandise and access to the great man himself, reached its target in record time with many of the available incentives selling out almost immediately.

Taking place at the Sound Advice / Pledge Music Building in central London on Wednesday 28th April at 7.30pm just 40 tickets are available for this exclusive chance to see Jack Bruce interviewed by acclaimed journalist Neil McCormick about his life and work and to see him perform an acoustic set, up close and personal.

Tickets to this intimate event are Â£100 each and also include complimentary drinks, an exclusive ‘pledgers only’ t-shirt and a signed copy of the new Jack Bruce biography, ‘Jack Bruce Composing Himself’, by Harry Shapiro.

There will also be the opportunity to bid for a very rare vinyl copy of Cream’s ‘Fresh Cream’ album (signed by Jack Bruce, Eric Clapton and Ginger Baker) that will be auctioned off on the night.

A percentage of the proceeds from the event will be donated to East Anglian Children’s Hospices.
pledgemusic.com/projects/jackbruce