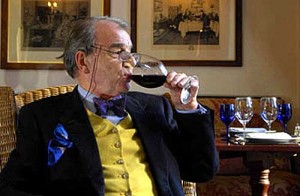 Floyd, renowned for his irreverence and booze-fuelled cookery shows, collapsed at his partner Celia Martin’s home in Dorset last night. Paramedics battled for 45 minutes to save him but he could not be resuscitated, his ghost-writer James Steen revealed.

Floyd, who had been living in France, had returned to Britain just three weeks ago to start chemotherapy for bowel cancer.

Tributes immediately started to pour in today as news of his death spread. On microblog site Twitter, hundreds posted their reactions every minute.

Chefs including Marco Pierre White, Jamie Oliver and Anthony Worrall Thompson rushed to pay their respects to the man who helped pave the way for their careers.
Floyd 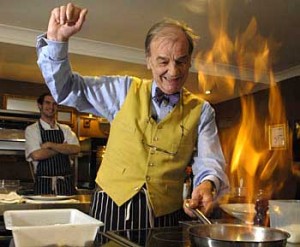 Pierre White said: ‘His ability to inspire people to cook just with his words and the way he did things was extraordinary. If you look at TV chefs today they don’t have his magic. It’s a very, very, very sad day for my industry and secondly for a nation.’

‘Keith was intellectual, he was intelligent, and he was articulate – he used words which everybody could understand. He was very special. The thing which is very sad is a little piece of Britain today died which will never be replaced. He was a beautiful man.’

Antony Worrall Thompson added: ‘I think all of us modern TV chefs owe a living to him. He kind of spawned us all. He turned cookery shows into entertainment.’

Jamie Oliver said Floyd was the ultimate TV chef and that he had been a huge influence on all other kitchen gurus.

‘Keith was not just one of the best, he was the best television chef. An incredible man who lived life to the full and an inspiration to me and to so many others,’ he said. 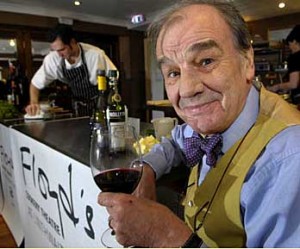 The star had been having intensive chemotherapy for cancer at the time of his death and had already undergone five serious operations to try and combat the disease.

He died just before the publication of his latest autobiography Stirred But Not Shaken. Serialised in the Mail this week, it is due to be published next month.

A launch had been planned at Pierre White’s Knightsbridge restaurant Frankies on October 6. It will now go ahead as a celebration of Floyd’s life.
from www.dailymail.co.uk


FROM Keith Floyd’s blog
Tuesday, February 20, 2007
The Hangover is Over – Let’s Rock and Cook
My Dear Gastronauts,

I am sorry I have not updated the blog. The fact is, over the last couple of months I have been so busy in my attempts to open Floydâ€™s Brasserie at the Burasari, I’ve been absolutely thwarted by the charming inefficiency of my colleagues.

I have to apologise for the fact that Burusari have pronounced that Floyds Brasserie was open, and it is in fact not open. It will open in the month of February, or possibly March.

Today has been a better day – I have just bought a Jack Russell puppy, called Florence. Who is in no way related to Milverton Blackfoot. Sometime soon I shall be creating the first Floydâ€™s Cookery Theatre at Linthwaite; sometime later I shall be hosting the World Gourmet Summit in Singapore at the Grand Hyatt.

Recently, on Antony Worrall Thompson’s Saturday cooks, I made a bit of a prick of myself by saying that the food police were a “bunch of spastics”. In my words, common parlance in the pub absolutely does not denigrate or vilify disabled people. If I offended, I apologise. On the same programme, I apparently said that celebrity cooks are so up their own bottoms that they do not realise that food should be fun, not a station waiting for a train to arrive to take them to a destination to learn how to cook.

Checkout my bandleader Bill – [email protected] Who, by the way, won the Ivor Novello award.

Your comments and your complaints please, at any time, please leave here on my blog.

But listen to me. Food is life, life is food. If you don’t like my approach you are welcome to go down to MacDonalds.

p.s. I’ve just had an email from Milverton Blackfoot. He has been arrested under suspicion of money-laundering by the HSB. How can you arrest a man for laundering money, who has none?