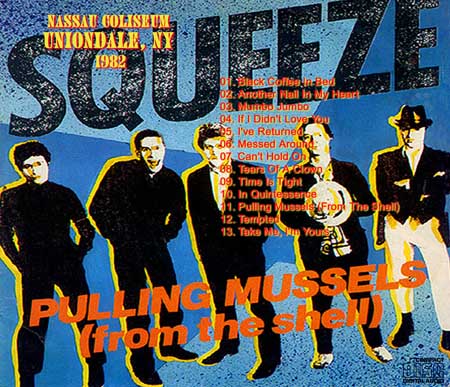 Legendary songwriters Squeeze reunite this year for a series of very special live dates on The Quintessential Tour, their first live shows this century. Eight years since their last tour and almost 30 years on from the release of their eponymous debut album, Chris Difford and Glenn Tilbrookâ€™s live return will see them perform a host of their classic pop gems including Cool For Cats, Take Me Iâ€™m Yours, Hourglass, Black Coffee In Bed, Slap & Tickle, Pulling Mussels (From The Shell), Up The Junction and many more.

The tour follows the upcoming album release of Essential Squeeze (Universal Music TV) on April 30th, the definitive hits collection (with two previously unreleased tracks) showcasing the very best of the bands 25 years contribution to the fine art of the pop single. Also released on the same day is the Essential Squeeze DVD, containing all their best pop promo videos (never before available on DVD), plus a full length live concert from 1982.

Since Squeeze originally disbanded, Difford has continued recording and is currently completing his second solo album provisionally titled Another Day Above Ground. The album will be released in the UK in the Summer 2007. On the live front, he is touring the USA for the first time in ten years with his acoustic trio during February and March. Difford will be undertaking a UK tour with his full electric band in May/June 2007 with a London date at The Jazz Cafe, Camden on 3 June 2007.

Squeeze are as relevant today as they ever were with the likes of The View, The Feeling, Razorlight, Fountains of Wayne, Ron Sexsmith and Kasabian citing them as a major influence. Formed in South London in 1974, the band enjoyed revered success releasing acclaimed albums including Argybargy, Sweets From A Stranger, Frank and Ridiculous. They headlined Madison Square Gardens in New York in 1982 and toured relentlessly to rapturous crowds.
glenntilbrook.com
chrisdifford.com
packetofthree.com
SQUEEZE
THE GREATEST HITS TOUR
special guests King Creosote
Next Monday 10th December
Waterfront Hall
Tickets Â£32.50 / Â£31.50
Tickets on sale NOW from Waterfront Hall box office, Virgin & all usual Ticketmaster outlets.
Credit card bookings & info: 0870 243 4455 (Ticketmaster 24hr line) or 02890 334455 (Waterfront Hall box office)
Book online at ticketmaster.ie / Tickets also available at the door on the night