A huge hit at the Sundance Film Festival, where it was nominated for the Special Jury Prize, the feature debut from writer-director Georgina Riedel, HOW THE GARCIA GIRLS SPENT THEIR SUMMER stars America Ferrera (Ugly Betty; Lords Of Dogtown; The Sisterhood Of The Travelling Pants), Elizabeth Pena (Down In The Valley; Transamerica), Lucy Gallardo (30 Days Until I’m Famous) and Steven Bauer (Traffic; Scarface)in a charming, amusing and touching story of three generations of women from the same Mexican-American family who each discover love during one sweltering summer in a small Arizona border town. 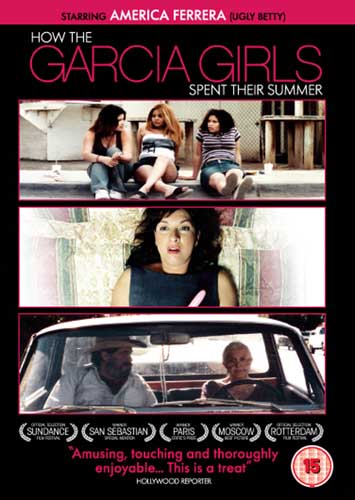 In the midst of the blazing mid-summer heat, elderly Dona Genoveva (Gillardo), the matriarch of the Garcia women, decides to buy herself a car even though she doesn’t know the first thing about how to drive it. To solve the problem, she enlists the help of her equally aged gardener, Don Pedro (Jorge Carver Jr.), who Dona gradually begins to view as more than just her driving instructor. Meanwhile, Rosa (Pena), middle-aged and recently divorced, is at a loss romantically until she finds herself attracting the attentions of Victor (Bauer), the married owner of the video store across the street from the butcher shop where she works.

A brief flirtation ensues before Rosa finally opens here eyes and finds what she is really looking for in the most unexpected of places.Romance is blooming, too, for the youngest Garcia woman, the teenage Blanca (Ferrera), Rosa’s daughter. Blanca has caught the eye of the slightly older new kid in town, Sal Juarez (Leo Minaya), who has already managed to establish a notorious reputation for himself. Giving Sal the benefit of the doubt, one afternoon Blanca agrees to go for a ride in his pickup truck and learns, like her mother, that love can often blossom in the most unlikely of circumstances.

Thanks to tremendous characterization and sterling performances from her cast, director Riedel weaves the stories of the three Garcia women with skill, evoking a heartwarming tenderness, both comic and emotional, that is guaranteed to appeal to movie romantics of all ages.

HOW THE GARCIA GIRLS SPENT THEIR SUMMER (cert. tbc) will released on DVD (Â£15.99) by Scanbox Entertainment on 26th May 2008 and will also be available to rent from that date courtesy of High Fliers.