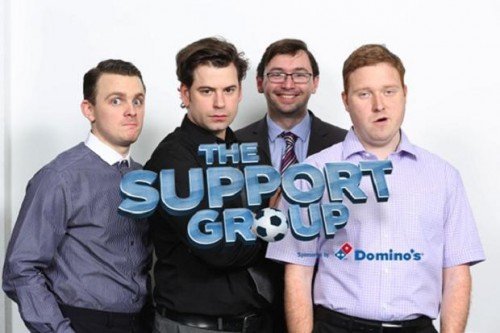 Watch this sponsored video by Domino’s for ‘The Support Group’, the first ever online sitcom written around current weekly football world events.

‘Doing a Joey’ – Episode 2: “A French lady visitor to the office triggers an identity crisis in Geoff”
The comedy has 11 weekly episodes and is based on a group of office mates, Geoff (Aston Villa fan), Spencer (Chelsea obsessed fan), Ronnie (Red born and bred) and Martin (supposedly a Manchester United fan), who love the beautiful game and banter.

Watch football-obsessed work colleagues Geoff, Spencer, Ronnie and Martin as they tease and taunt each other in response to topical stories from the football world – from plucky Bradford City’s falling at the last hurdle in the League Cup to Balotelli ordering a life-size statue of himself.

You can watch brand new episodes every Thursday from lunchtime from now until the end of the football season.

‘The Support Group’ was created and produced by Bwark Productions, and was written by Chris Little, Jonathan M Stern.

Bwark is best known in the UK for its hit E4 comedy series The Inbetweeners. The third series drew a record audience in October 2010 (both for E4 and 4OD) and The Inbetweeners movie premiered in the UK in August 2012 before going on UK and international release.