Lots of things have happened to the 23-year-old Ida Maria in the last 6 months. UK music insiders put her near the top of a BBC poll of bands most likely to break big in 2008 and her perfect brand of punk-pop has been described by NME as â€œthe midpoint between The Strokes and Ms. Winehouseâ€.She appeared on â€˜Later With Jools Hollandâ€™ and stole the show, even upstaging her hero Morrissey (â€œI went to shake his hand after the show and was rather shocked by how much he smelt of aftershave,â€ she says). Ida Maria, singer of music chart hit, â€œI Like You So Much Better When You’re Nakedâ€œ plays The Limelight on Wednesday 5th November. 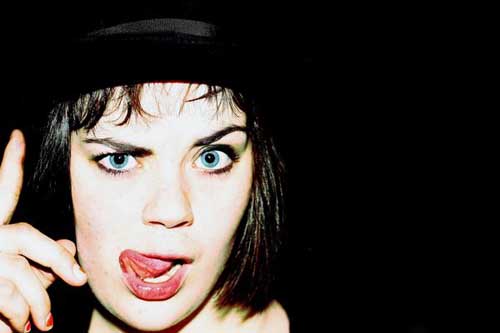 â€œOn stage I go into a tranceâ€, says Ida. â€œI want to live the music with my whole body. Playing live should be hard, physical work, like being a fisherman or a carpenter. You should put everything you’ve got into it.” As the London Evening Standard put it, Ida has â€œthe rare performerâ€™s ability to turn every night into the gig of her lifeâ€.

Woe betide any bands who fail to do the same. When she witnessed a Swedish electronica act called Zietgeist at a festival (â€œlooking too cool and pretentious and up-themselvesâ€) she jumped over the security barrier, leapt onto the stage and decided to teach them a lesson. â€œThey were making me angry,â€ she says, â€œso I ran to the front and bit the singerâ€™s arse. Hard. They looked terrified. I was really happy for the rest of the night!â€

Ida grew up Nesna, a tiny university town in the north of Norway, population 1,776, with one gas station, one pub, one closed-down shoe factory and lots of mountains. It’s near the Arctic Circle, which means that it’s in perpetual darkness for half of the year. “As soon as autumn comes everyone curls up and goes into a seasonal depression without noticing it,” she says. “It’s like the body saving energy and hibernating. I think that explains the whole Scandinavian melancholy thing. If there’s a dark edge to my music I think it comes from that.”

Her mother is a college teacher whoâ€™d sing in choirs and at weddings, her dad worked variously as a fisherman, carpenter, computer engineer and teacher and also played bass in various jazz and ska bands. She absorbed both their tastes in music and was also turned on to Bob Dylan and Jimi Hendrix by a rather bohemian family GP.

Aged 16, after failed piano lessons and rather more success with the guitar, she moved to Bergen, on the southwest coast of Norway, to study music. The music course was a disappointment (â€œit was run by these mad, fundamentalist Christians, who declared that dancing was like sex standing upâ€), but she learned more on the cityâ€™s thriving music scene a place where the likes of Kings Of Convenience, Sondre Lerche, Annie, Erlend Ã˜ye, RÃ¶yksopp and Datarock would rub shoulders with assorted black metal bands, avant garde jazz musicians and bluegrass singer-songwriters.

“It was a fantastic place to be a musician, and a great place to develop,” says Ida. “I used to have a thin, girlie little voice, but in Bergen I discovered the inner beast that was hiding in my vocal chords.â€

After two more years in Bergen, sharing a tiny, rotten, condemned apartment in Bergen with seven other people, she decided that she â€œwanted to stay in a place with proper windows, and floors that were somehow hanging together”. So Ida moved to Uppsala in Sweden, where she enrolled to study at the city’s prestigious university.

“I studied classical music history, pop music history, rock mythologies, ethnological music, all really cool subjects. And I loved it. But I soon realised that I’d become a full-time a musician and, instead of being in lectures every Monday, I’d be doing gigs around Norway and Sweden.

Having booked a last-minute slot at a big Swedish festival, she rushed around music venues in Stockholm to find musicians to join her band. “I got in the best guys I could find, we rehearsed for two days, and we then played the festival,” she says. “We sounded like crap, but the guys were fantastic and they were all great players and it all kinda worked out.”

The musicians (Stefan TÃ¶rnby on lead guitar, Johannes Lindberg on bass, and Olle Lundin on drums) remain the core of Ida’s touring band, with all of them playing and singing backing vocals on her debut album, â€˜Fortress Round My Heartâ€™.

â€˜Fortress Round My Heartâ€™ is the debut album from 23 year old Ida Maria. Featuring ten exquisite three-minute punk-pop songs about God (â€œStellaâ€), depression (â€œDrive Away My Heartâ€), sexual politics (â€œI Love You So Much Better When Youâ€™re Nakedâ€), partying (â€œQueen Of The Worldâ€), drinking (â€œOh My Godâ€) and love (â€œLouieâ€), â€˜Fortress Round My Heartâ€™ is visceral and direct, and perfectly captures the energy and spirit of Ida Mariaâ€™s acclaimed live performances.

“I wanted to make 10, short, sharp, perfect tracks, no more than three minutes long. I wanted pop music that hits you hard RIGHT THERE,” she says, hitting her stomach. “Music you can dance to, drink to, go crazy to. You know, I love and appreciate and understand jazz and classical and avant garde music, but pop is different. It’s physical, it’s visceral, itâ€™s concentrated. A producer in Norway once said to me, well Ida, youâ€™re a kind of arty punk singer, you canâ€™t really write â€˜popâ€™, can you?â€™ And that drove me mad. I was like, fuck you, I can write pop music. Thatâ€™s why I wrote these songs. I love how pop songs connect with people, I love that instant reaction. I love to be on stage and to smash things up, with words and with music. Thatâ€™s how pop should be.â€

Like most of her compatriots, she sings in English (“Norwegian has too many consonants, too many Ks and Rs and Ts and Gs – the poetry is wonderful but it’s not sexy enough to sing!”). She says her song-writing is informed by a benign variant of “synaesthesia”, a condition where your senses are jumbled up to the point where you see sounds and hear colours. She sees song-writing as “assembling shapes and patterns”, and her songs are “yellow” or “black” or “spiky”. “The stage is my canvas, it’s where I put all those colours and shapes and patterns that are bursting out of my head all the time.”
idamaria.co.uk
myspace.com/idamaria
CDC Leisure Presents
IDA MARIA
Wednesday 5th November 2008
The Limelight – Belfast
Doors 9pm Tickets: Â£10.00
Tickets on sale from Katy Dalyâ€™s, Zavvi & all usual Ticketmaster outlets. Credit card bookings & info: 0870 2434455 or book online at
geturticket.com /ticketmaster.ie