By Cathy Black
After a very successful weekend in early February, the JD Set returns to the Spring & Airbrake in Belfast with the highly successful Manchester trio I AM KLOOT. 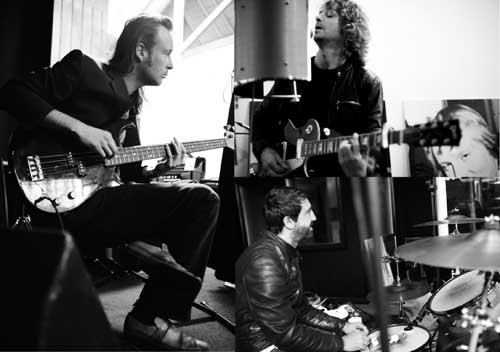 PLAY Moolah Rouge, the new record from I Am Kloot, captures more dark nocturnal romance from one of Manchester’s most original stalwarts of the scene.
Fabled for their awesome ability to encapsulate both the epic and the everyday – from chip-shop cheek to elemental grandeur, the band manage to sound as fresh as the did when they started in the late 90s.
Since the release of last year’s BBC Radio 1 John Peel Sessions, the trio have skirted the UK mainstream to top the bill at festivals in Europe, feature on blockbuster movie soundtracks (Sunshine,Â  Snow Cake, Gone), and maintain a loyal fanbase including Pete Doherty, Danny Boyle, and Elbow’s Guy Garvey, who produced the band’s debut album NaturalÂ  History.
I Am Kloot are now set to reveal their fourth studio album and their first new material since 2005’s Gods and Monsters.
Play Moolah Rouge is a ramshackle ride through a gutter-lined but starlit urban nightscape.Â  It’s one man fighting in bed.Â  It’s two lovers on a ferris wheel.Â  It’s three musicians powering out their hearts and souls.
“We treated the recording as a gig”, said singer and guitarist Johnny Bramwell.
“The dynamics you can hear are the real dynamics.
“One year we played 200 gigs; the next 150.Â  We became aware that the audience and that live feeling were actually better than our records – and that was a big frustration.Â  So we took a gamble”.
The album is dedicated to much-missed Manchester singer-songwriter Bryan Glancy, who died in 2006 and was a good friend of the band as well as aÂ  respected contemporary.
“Lots of the lyrics on the album come from conversations with Bryan”, said Johnny.
Play Moolah Rouge is scheduled for released on April 14, 2008 on Skinny Dog Records Ltd, and fans are invited to join Johnny, bassist Peter Jobson and drummer Andrew Hargreaves on their forthcoming European tour in March and their UK tour starting on April 14.