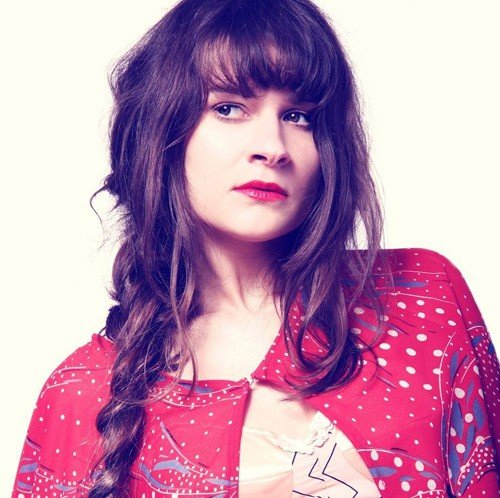 With new single ‘Onesome’ set for release on March 12th and a debut EP due in the Summer, we meet with German-born, London-based Anne Freier.

Listen to the original version of ‘Onesome’ here

Anne the music of I Am Harlequin touches on various genres, how would you best describe your sound to someone who has yet to hear your work?

I usually want to give them a long explanation, but I get a bit too caught up with the subject of music once I start speaking about it, so as a courtesy to your readers I am going to keep it brief: it’s electro indie pop with classical roots

What influences your music?

Besides classical music (Prokofiev, Sondheim, Desplat), I am influenced by 70s prog pop and folk (Bush, Mitchell, Slick and Lee Jones), as well as 80s music.

And I like to think that my lyrics draw inspiration from personal experience as well as the things that happen around me. E.g. ‘Onesome’ was written in the aftermath of a bad relationship, whereas ‘The King’s Daughter’ is a fictional account of female oppression.

Have you any particular methods you use when you are writing new songs?

Yes. I will usually start with the core melody on either piano or harp, because I believe the best songs are the ones which still sound great even if stripped to purely vocals and a single instrument to accompany.

I rarely start with drums or percussion, although lately I’ve done a lot of remixing and it makes senses to start this way here.

Once I’ve established my core, including the lyrics, I record it and will go into production, adding instruments.

And that probably takes longest, because it requires a lot of arranging and of course re-arranging.

I never finish a song in one day, because I need that set of fresh ears the next day to have another listen and determine whether the mix is truly what I want it to be.

Sometimes I will leave a song for longer and move on to the next, and then when I’ve forgotten about it and come back, I can really tell whether it’s good or bad.

New single ‘Onesome’ has already went down very well across many UK radio stations, what do you think has made it so popular?

I think that’s due to two factors – it’s a catchy tune and I can’t say this for sure, but I hope people can relate to it and embrace the message of ‘going it alone’.

You of course handle all aspects of I Am Harlequin, is there any reason why you prefer to manage things alone?

Well I’ve been diagnosed as a control freak haha. But seriously, it’s just a lot less time consuming and sometimes more reliable to work on your own.

That being said, there are of course a lot of benefits to working in a team as well and during rehearsals for live performances the band and I do work together very well.

They offer a lot of their ideas and expertise and we make sure that each song sounds slightly different to the recording (to keep it interesting that is).
What is better for you, live performance or working in the studio?

They are both equally good. I love being in my studio, creating new material and I love being on stage performing. I really couldn’t choose either over the other.

Your debut EP is set for release this summer, what can we expect from that?

Do you have an live performances lined up to coincide with either the Single or EP releases?

I’ll be performing a live session on Saturday (10th March) for BBC 4’s Loose Ends (6pm), which I am very excited about. And there’ll be many many shows this month and all throughout the rest of the year.

Renowned Dubstep producer Killahurtz has remixed ‘Onesome’ (on the single release as a bonus track), this version takes the song on a slightly different journey. How did that collaboration come about?

A friend of mine knew Killahurtz and introduced me to him. We instantly clicked and he loved the track, so he wanted to remix it. He’s a talented guy and I am very happy with his version.

Would you like to collaborate with any other producers/writers performers in the future?

Sure. I am very open to collaborate with remixers and always like to hear from them. I have no preferences here, because I’ve heard a lot of great producers that are yet fairly unknown.

So whether you are Skrillex or a newbie, please feel free to get in touch 🙂
‘Onesome’ is released on March 12th, ahead of I Am Harlequin’s debut EP due out this summer.
iamharlequin.com