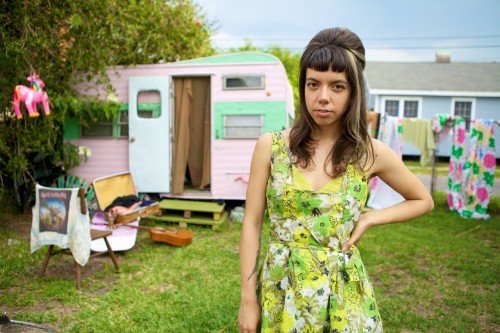 Hurray for the Riff Raff started as a project for me to write original songs, the band has a taken on many different forms but as of now, it’s
Yosi Perlstein and myself with Sam Doores, Dan Cutler (of Sam Doores and the Tumbleweeds) and Casey MaCallister joining us to perform our more rockin’ songs.

I met Yosi when I just turned 19, at that point I had not really spent much time writing songs or performing them, we travelled together for a short stint and when he moved to New Orleans we were drawn to each other musically.

We have a great connection, he really understands where I’m coming from.

Sam Doores and I have been best friends since we met 5 years ago, he’s slowly joined the band and is a great force in helping me get out of my comfort zone and try to write some music that will make people dance. I’m lucky to play with such great musicians.
We would describe your music as country-folk with a modern spin. Would you agree with that and is that the genre you enjoy playing?

I think that all Rock and Roll derives from classic country and blues so I’d be just fine being in that category.

I would say we have some rock and roll in us, we try to add some of the attitude and rhythm of cajun tunes Yosi has learned, we also have a lot of the current New Orleans music scene in us.

I would say a similarity between all of my peers in the New Orleans music scene is an appreciation for music that’s come before us. We want to learn it, study it and turn it into something new.

I think that’s what The Band did, Bob Dylan, Gillian Welch, all the best have learned from the old records.

You have a much anticipated UK tour coming up soon, what can UK fans expect from your live show?

You can expect a lot of songs from the new record, ‘Look Out Mama’. We’ll be the four piece that’s on the record which I’m excited about.

I guess we’re gonna try to blend that acoustic sound we have with some of the electric aspects of the record. We’re traveling light so some of these songs will be more stripped down, I like em that way personally. 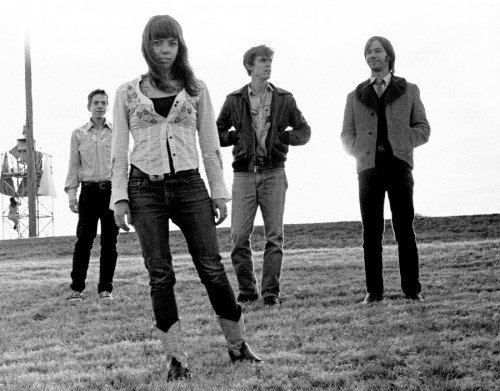 Your debut album received some wonderful reviews in the UK (and of course further afield), how does it feel to be on the receiving end of such praise?

It’s exciting to get any attention abroad, it’s a dream come true to be able to travel so far playing music. We all know how lucky we are to get this opportunity just by playing songs, it’s magic really. If our research is right we hear you as band play many small club/pub venues on a regular basis. Do you enjoy more intimate venues better than larger ones?

Haha, we don’t really know too much about the larger ones! All I know is a good show for me is just as much about the audience reaction and
participation as it is about us playing well up there.

I feed off the audience, so if they’re being responsive and encouraging it can be a show to ten people and I’ll feel great afterwards.

Does your new album ‘Look Out Mama’ cover any new ground for the band musically?

Thanks to the collaboration between me and Sam Doores, our goal was to capture some sounds that have inspired the two of us from our favorite
bands and records of the 1960’s. I really wanted a record that felt old and new at the same time.

I wanted to push my writing so that I could tell stories (ode to john and yoko), and explore the ability to write good pop songs that also has an underlying melancholy or fear of the times we live in. (lake of fire) I think my favorite track is Look Out Mama, because it sounds like home (New Orleans) to me.

Can you describe the process you have when creating a new track?

It changes all the time, but normally I’m alone and I write some bare bones song. I bring it to someone in the band and we flesh it out and
try to build on it.

Do you as a band use social media to monitor feedback from fans and interest in your work?

I think the main reason people are interested in bands using social media is because we all want to feel close to the artist we enjoy.

I try not take it too seriously, but also interact with it as just that, a way to let people see what I am actually like as a person, what i’m
interested in, what I care about.

I sometimes post articles I think are important or share a worthy cause someone i know is trying to raise money for. It’s really sweet when people write encouraging comments, of course I appreciate that.

What is next for you after the UK tour and album release?

We’re gonna tour Germany afterwards, then Sam Doores and I will be heading to France and Italy for a duo tour. I can’t wait!

Was there a master plan when the band formed, did you have any targets to achieve with your musical career? if so have you achieved them yet?

Yosi and I concocted our master plan recently on tour, we want to help bring on a feminist revolution. It’s not here quite yet, but it’s coming to a town near you.

Finally what artist/artists do ‘Hurray For The Riff Raff’ listen to when they are relaxing after a gig?

Shovels and Rope!! I listen to them on repeat. They are my favorite group right now. Besides them, alot of Otis Redding, Dolly Parton, Townes Van Zandt, Karen Dalton, The Carter Family, Aretha Franklin, Bob Dylan and of course a lot of Beatles.

When we’re in New Orleans we can go see any of our friends play which is a real great part of living there.

Folks like King James and the Special Men play every monday at a neighborhood bar BJ’s which is a great night of dancing, Tuba Skinny plays some awesome traditional New Orleans Jazz, and on tour we get to listen to folks like Morgan O’Kane, Spirit Family Reunion and of course our longtime tour buddies Sam Doores and the Tumbleweeds.
HURRAY FOR THE RIFF RAFF
‘LOOK OUT MAMA’ OUT 20TH AUGUST
UK TOUR DATES 2012
facebook.com/hurrayfortheriffraff
©FAMEMAGAZINE.co.uk