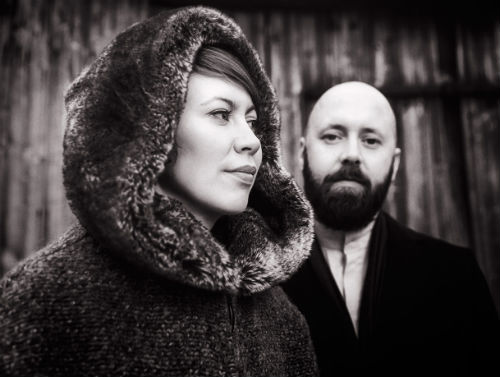 Berlin duo Hundreds – Philipp Milner (Synthesizer, Piano, Beats), Eva Milner (Lyrics, Voice, Autoharp) – talk about their sophomore album ‘Aftermath’ (Released in UK/Europe – May 26 via Sinnbus), their dream festival line-up, getting older and the best and worst thing about being in a band with your sibling…

Hello I am Eva from the band ‘Hundreds’. Me and my bandmate are siblings, Philipp is my older brother. We started the band in 2008, released our first album in 2010 and are now on the road with our sophomore album ‘Aftermath’. We make electronic music, influenced by Radiohead, Björk, The Notwist.

What is the album ‘Aftermath’ all about?

‘Aftermath’ is about growing, getting older, finding a place in this world, about saying goodbye and meeting again. The pictures that could come up in your mind are for example something apocalyptical, a ten-headed beast, but also a golden light in a green forest and the sea with big waves!

For those unfamiliar with you guys, what three tracks from ‘Aftermath’ would you recommend we listen to to ‘get to know’ you guys better?

‘Aftermath’, ‘Rabbits on the roof’ and ‘Our past’

What are the best and worst things about being in a band with your sibling?

We can fight and nothing gets destroyed between us (the best thing). We know each other so well, sometimes we think for each other (the worst thing)

You’re a duo but what other duos are you fans of?

What can people expect from a Hundreds live show?

It’s like watching a good movie, which can move your imagination and your heart to places, where you maybe have never been before. We emphasise our music with a great light show and video installations, also we transform the songs into something bigger than on the album.

Your dream festival line-up would be (with you headlining of course!)…

Radiohead, Björk, Portishead, Jon Hopkins, The Dø , Jenny Wilson, The Knife (or Fever Ray), Arcade Fire, The Notwist, Lali Puna, Sigur Ros, and maaany more. But if that happened, I would definitely come!

If you could score a film, which would it be and why

Any Tim Burton-movie – they’re like a stunning fantasy world.

And who would play you both in your Oscar winning musical biopic?

Judy Dench/ Jack Nicholson (its about being old)

Finally, what are your plans for the rest of the year?

We will travel to L.A. In the beginning in April to play at MUSEXPO. We are really looking forward to that, we will play in Hollywood and that is, of course, exciting! Also we will play many festivals in Summer all over Germany and maybe other countries. We want to tour in UK, maybe at the end of the year.

‘Aftermath’ will be released in
Germany, Austria, Switzerland – March 14 (via Sinnbus)
UK/Europe – May 26 (via Sinnbus)
North America – May 27 (via Sky Council)
Japan – May 28 (via IRMA Records)