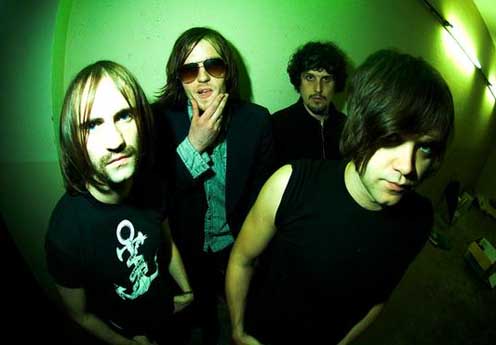 Humanzi are an alternative indie rock quartet hailing from Dublin that combine guitars with dance beats and their sound shows influences of classic rock nâ€™ roll, to punk rock and dark electronic music. They have toured extensively, with the Foo Fighters, Dirty Pretty Things, Battle, Ian Brown, Strokes and Pixies among an illustrious list of headliners. There song Straight Lines was used earlier this year by Setanta sports (USA/Canada) for a Rugby commercial. Humanzisâ€™ new album â€˜The Kingdom of Ghostsâ€™ is due for release later this year, their first single off the album â€˜Balls Ballsâ€™ was released in February. They play Auntie Annies Attic on Wednesday 10th June.
Check out:-


“Bloodline” by The Beat Poets

The Beat Poets
â€˜Blistering, Frenzied, blood-stirring, rock that weaves its way through U2, the Foos and The Vines The Beat Poets are one of the most exciting new acts to emerge from Northern Ireland in recent years.â€™ NME

â€˜they could be the biggest band to come from the North of Ireland since Snow Patrol.â€™ Irish Star

Touring relentlessly the Beat Poets have supported World renowned acts such as Sonic Youth, The Chemical Brothers, The Duke Spirit, Nine Black Alps, The Parlotones and much more from venues such as Marlay Park (Dublin) to Canadian Music Week and 6 storming shows at the 2009 South by Southwest Music (SXSW) music festival in Austin, Texas. With recent TV performances on The BBC and UTV the bands latest tracks are now licensed with the BBC, Channel 4 as well as MTV and are currently on the latest series of MTV One shows The Hills & Girls of Hedsor Hall (2009) in the US adding to the band growing reputation.

Working with world acclaimed producers Greg Haver (Manic Street Preachers, Lost Prophets), Dave Way (Foo Fighers, Stevie Wonder) and Neal Calderwood (Fighting With Wire, The Answer) the band is currently gearing up for releases in August and October of 2009 as they continue to perform worldwide. Their debut Album is coming out early 2010.
www.myspace.com/humanzi / www.myspace.com/beatpoets