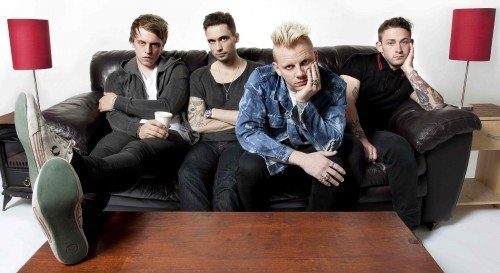 Punk rock is one genre of music that never seems to go away. One such band keeping the flag flying for it are four-piece band Hounds, their inclusion of high energy dance to the mix will certainly shake things up and drive new fans to the cause in thier droves.

Fame caught up with band member Olly Burden to learn more about this act and their new EP ‘The Wicked Witch’.

Hi Olly so in your own words how would you describe your music?

Its a clash of influences I guess, but the roots are punk rock mixed with dance beats. Its everything we are into, thrown into one big pot!

What can we expect form your new EP ‘The Wicked’?

‘The Wicked’ is a snap shot of where we are at right now I guess. We wanted to put something out as a kind of teaser of whats to come. The songs on it are pretty instant, like a bit of a slap round the face to show you we have arrived.

Where did the band name Hounds come from?

It was from an old Horror film poster, and it looked good on there so that was good enough for us! We wanted something that would conjure up imagery to help with the feel of the band and TITS was already taken.

You are set to play Download this year, how did that come about?

We have the best agent in the bizness, he makes shit happen.

Are you excited about being on such a festival bill?

Yeah of course man, playing festivals like DL is what makes all the hard work worth it. Its a really big deal for a band to be involved in and we will be there to give it everything we have got. Playing festivals is just great in general, its an all day piss up!

Have you any live shows/tours planned after Dowload?

At the moment we have no scheduled shows after Download, but we have an EP launch party just before on 31st of May at Sebright Arms, London. Its free entry. But I would think we will be touring later in the year for definite.

What inpires the Hounds music?

We get inspiration from anywhere really, i get a buzz off of anything raw thats played with energy and intent. I will just hear something that gets me excited and then I will go away and try to recreate that vibe. I cant stand wishy washy formula shit played by desperate fakers, its probably easier to say what doesn’t inspire us to be honest!

Me and Chas (drummer) have been best friends since we were kids and we met Hammond and Wal through the scene and gigs we were going too.

What made you blend punk with dance?

They are both genres that we grew up listening too. Even thought the two styles of music sound completely different sonically, they both have that same primal energy that just makes you want to get up and jump around. Thats the kind of music I like!

How well do the band get on in private?

We hate each other!

What would you all be doing if you were not in the band?

Chas would be a comedian. I’d probably be a janitor!