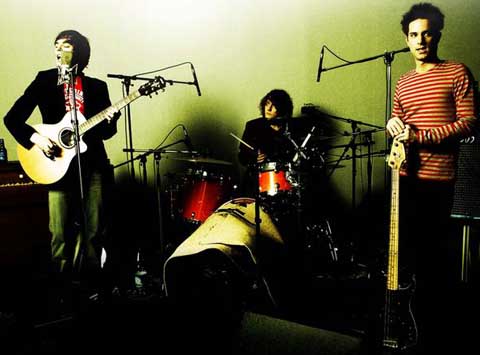 From Belgium To Blighty: Sensational New Band Make Glittering Debut
Having already garnered an army of dedicated fans and MTV plays across Europe, Puggy have now fully outgrown their domestic musical surroundings and are set to kick-in the ears of indie kids and grown-ups alike in the UK.They recently supported US mega-group Incubus on their 15-date European tour at Incubusâ€™ personal request and are performing a media showcase on the 5th Dec at the Water Rats venue, Kings Cross.â€œDubois Died Todayâ€ Debut Album Out November 12th
European Tour Supporting Incubus this autumn
â€œThis band are amazing! Letâ€™s get them on tour.â€ â€“ Brandon Boyd (Singer, Incubus)

â€œI was more than happy to support Puggy through the early days. I think they are a brilliant talent and Iâ€™m sure they are going to be one of the few bands that make it out of the thousands that try.â€ -Vince Power CBE

Puggy, the new formidable band hailing from Brussels, Sweden and the UK are about to make an almighty wave on the UKâ€™s indie shores.

Having already garnered an army of dedicated fans and MTV plays across Europe, Puggy have now fully outgrown their domestic musical surroundings and are set to kick-in the ears of indie kids and grown-ups alike in the UK.

Currently on tour supporting US mega-group Incubus on their 15-date European tour (at Incubusâ€™ personal request) the band popped their festival cherries in summer 2005 with performances at Reading and Leeds festivals, and a year later performed a show-stopping set at the BenicÃ ssim festival, Spain.

Prior to this they have played shows at nearly every sweaty underground London live venue, where they caught the attention and became a personal favorite of legendary live music promoter Vince Power. Vince then booked them to play gigs at prestigious venues such as the Jazz CafÃ© and Borderline, and also invited them to play Benicassim.

In early 2006, the band played a private showcase for legendary multi Grammy award-winning proÂ¬ducer, Steve Lillywhite (The Rolling Stones, Morrissey, U2, The Pogues). Steve was so impressed with the band that he encouraged them to record their soon-to-be indie anthem â€œThe Luckiest Crime.â€

With 14 tracks of remarkably catchy tunes, expect imminent radio airplay from this revelatory new band. Their premier musical offering is a melting pot of contemporary rock & acoustic pop adorned by astonishing melodies and lyrics filled with morbid irony. Tales of death, brothels & crime entwined into compositions that are simple, yet innovative, create a unique ambience and a level of musical maturity rarely attained on an introductory album.

â€œSimple Dreamsâ€ and â€œOut of Handâ€, two songs from â€œDubois Died Todayâ€ have already achieved national playlist on Belgiumâ€™s MINT, Radio 1 and FM stations. The music video for â€œOut of Handâ€ is also being broadcast across all music channels.

Puggy are currently on tour with Incubus until the 10th November.
myspace.com/puggyband
puggyband.com