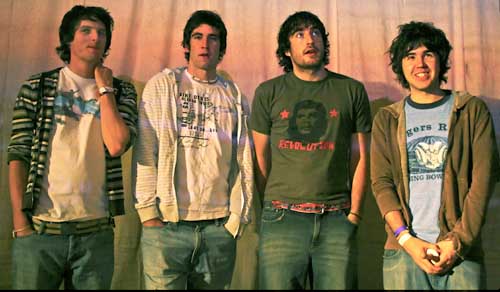 OK so we have a little bit of an exclusive for you here.
New Dublin rock band The Coronas are not just the most hotly tipped thing this side of Christmas but at least one of them comes from good Irish music stock.
The band, who have been doing great things in Ireland â€“ such as playing the Late Late Show, Whelans and The Village theyâ€™ve even managed to release three singles â€“ of which two made it into the Irish Top 20.
Their debut album Heroes Or Ghosts was released last week and is already hot-footing itâ€™s way up the Irish Top 30.
Ok, ok, ok we hear you â€“ yes we had promises of gossip and news â€“ well apparently rumour has it that young Danny Oâ€™Reilly from the band is none other than the son of legendary Irish female singer â€“ Mary Black !!!

If you want to check the guys out head down to the Ardhowen Theatre in Enniskillen on Saturday November 17.
myspace.com/coronaband