Paramore, the rapidly emerging pop-punk quintet from Tennessee, have just announced their debut Irish concert at Dublinâ€™s RDS Simmonscourt, June 02nd 2008.
Over the past two years, Paramore has been building a near-deafening â€œnext big thingâ€ buzz. Driven by riveting live shows and the undeniable charisma of their frontwoman, 18-year-old Hayley Williams, they have captivated an increasingly rabid following. Confronted by the double-edged sword of overwhelming early praise, Paramore has risen to the challenge and recorded an album that happily delivers on all the claims made on their behalf. With their new Fueled By Ramen collection, â€œRIOT!,â€ they announce that they have the talent, the passion, and the songs to take themselves to the next level.

The bandâ€™s rise has been the result of consistent hard work since Hayley first met Josh Farro (guitar, age 19) and his younger brother Zac (drums, age 16) while they were together in school four years ago. After adding Jeremy Davis (bass, age 22), Paramore was formed in 2004. They played their first show in Nashville, and were soon building a local fanbase. After just a few months of gigging, the band had their first big break in early 2005, when Fueled By Ramen founder John Janick saw them at a gig in Florida. He was instantly struck by their presence and their dedication, and he immediately signed the band to the label. As Hayley says, â€œFueled By Ramen has been amazing to us. So many kids started checking us out because our name is on their roster. Itâ€™s like a big family; we all share such a massive unit of fans.â€

Upon the release of their debut album, â€œALL WE KNOW IS FALLING,â€ in the summer of 2005, the music community began taking immediate notice of the band. The New York Times and Spin hailed the album, singling out Hayley as a star in the making. Non-stop touring throughout 2006 with bands such as Straylight Run and Simple Plan, combined with show-stealing festival performances at Warped and Bamboozle, continued to build the momentum. The year culminated with a sold-out headlining tour of North America in the fall of 2006, as well as successful tours of both Europe and Japan.

The accolades continued as 2006 came to a close. After an overwhelming response to a U.K. tour at the end of the year, Kerrang! readers voted Paramore as the â€œBest New Bandâ€ and Hayley as the #2 â€œSexiest Female.â€ NME named Paramore one of the ten acts to watch in their â€œNew Noise 2007â€ feature, proclaiming Williams as â€œyoung, articulate and with plenty to say.â€ Some bands would begin to get nervous with those kinds of accolades. Not Paramore. â€œI love getting all the â€˜Next Big Thingâ€™ notices,â€ says Hayley with a grin. Josh continues, â€œThe first few years everything was new to us and we made a name for ourselves as a band in a lot of places. But with â€˜RIOT!,â€™ weâ€™re really ready to blow peopleâ€™s minds.â€ 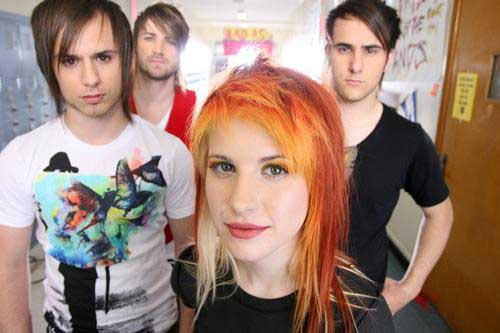 It only takes one listen to â€œRIOT!â€ to see the depth of the bandâ€™s growth in the past two years. Produced by David Bendeth (Hawthorne Heights, Red Jumpsuit Apparatus, Killswitch Engage), the music has taken on a richer, deeper, more intense tone, without sacrificing any of the melodicism that has been their trademark. As Hayley explains, â€œFor us, the title â€˜RIOT!â€™ literally means an unbridled outburst of emotions. When we were writing, it seemed like our thoughts and emotions were coming out so fast that we couldnâ€™t control them. It felt like there was a riot within us. So the album takes our passion to a new level; itâ€™s just all raw energy.â€

That raw energy and passion is evident in â€œMisery Business,â€ a song that has its origins in a message Hayley put on the bandâ€™s Live Journal page, asking her fans to post what theyâ€™re ashamed of. â€œI found that people really were reaching out to someone to spill their guts to,â€ she recalls, â€œSo I did the same thing lyrically in the song and let everything out. Itâ€™s more honest than anything Iâ€™ve ever written, and the guys matched that emotion musically.â€

The wryly titled â€œFor A Pessimist, Iâ€™m Pretty Optimisticâ€ stems from what Josh reflects as â€œputting your faith in someone and they blow it.â€ But in the writing of the song, he saw that his faith in his bandmates was not misplaced: â€œI wrote the music specifically to be awesome live and to be extremely energetic. It all came out at once. I showed it to Hayley and she just nailed it lyrically. She completely got the feeling I wanted the song to have.â€ And â€œHallelujahâ€ serves as one of the albumâ€™s true anthems. As Hayley recounts, â€œItâ€™s one of the oldest songs weâ€™ve got, but we wanted to save it for this record, and itâ€™s the perfect home for it. Itâ€™s a claim of victory for both ourselves and our fans.â€

That connection with their audience is most evident in â€œBorn For This,â€ a song that was specifically written for their fans. â€œWe wrote it as a message to them,â€ Hayley explains. â€œTheyâ€™re going to take us to the next level. Everything theyâ€™ve done has helped us so muchâ€¦ itâ€™s really kept us going.â€ And to drive that point home, the band held an online contest for fans, with the winners getting to sing gang vocals on the song.

â€œNext big thingsâ€ come and go, but it is obvious that Paramore has something special â€“ both talent and staying power. â€œRIOTâ€ is the bandâ€™s declaration of ambition, musical growth, and dedication. â€œWe all have such a love and passion for this music,â€ says Josh. â€œWeâ€™re lucky to have made such a connection with our fans that weâ€™re making a difference in their lives.â€ Hayley concludes, â€œWe want everyone to hear this album. We want to take it as far as we can. â€˜RIOT!â€™ is everything we ever wanted to say on one album. If it all ended today, this is what weâ€™d want to be remembered for.â€
paramore With Special Guests
RDS Simmonscourt 02 June 2008
**OVER 14â€™s**
Tickets 37.00euro go on sale Monday 07 April
Tickets priced 37.00euro go on sale Monday 07 April at 9am and can be purchased through the following options:
* In person: from 99 Ticketmaster outlets nationwide
* 24hr hotlines: Tel: (ROI) 0818 719 300 (NI) 0870 243 4455