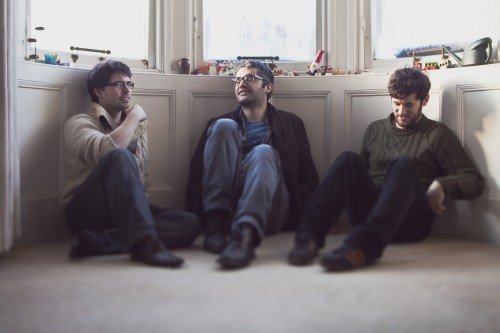 ‘Badger’ has a heart wrenchingly eerie sound that creeps inside your bones. Stephen Houlihan’s ghostly vocals echo and intertwine around beautiful strings whilst percussion slowly builds.

‘Urban’ is a pleasant u-turn, more reflective of the band’s influences. Armed only with a simple acoustic guitar, the song channels an Iron & Wine vibe. 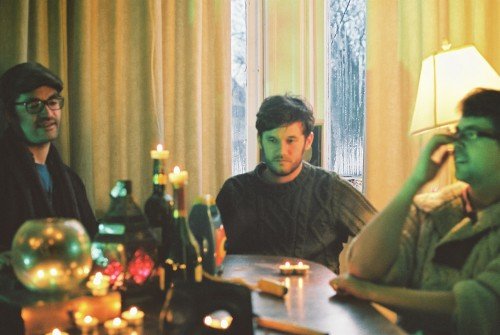 Who are Hiva Oa?

We are huge Jacques Brel fans. Hiva Oa is where he spent the last few years of his life.

You’re all based in Edinburgh but aren’t actually from the Scottish capital – how did you all meet?

We were all drawn here for different reasons and were here for a number of years before we met. Christian and myself were playing in band together before we started Hiva Oa. We were quickly joined by Marco and the three of us have embodied the core of the band ever since.

The video for “Badger” is really intriguing – can you tell us what the video / song is about?

From the opening few notes it was essential that we were able to create a sense of disorientation and intrigue.

As the track weaves through a sea of cellos, bass, percussion and a mountain of delay, the abstract voice attempts to bring some clarity to the circumstance.

The question is asked, ‘Any warning sign?’, with the reprise, ‘She goes’. However, it can be said that this is still a song of hope.

You released the video at the beginning of the year, why release the single properly now?

For that simple reason. We never released it as a proper single. As the year was coming to a close and we are now beginning to record our new material, we felt it was a great way to see out what has been a very busy and productive year.

“Badger” sounds completely different from the other tracks on your debut album (“The Awkward Hello, Handshake, Kiss”). Is there a reason for this and what are your general influences?

I wouldn’t say it sounds completely different to all the others. Certainly it sounds different to its counterpart Urban, but that was the point of releasing the two together.

If you look at the album as a whole, there is a clear distinction between where our headspace was when started the recording in the earlier days of Hiva Oa, in the vein of tracks like Urban, Floods, Not In My Name, and where our sound was going when we finished, as you can hear from tracks like Badger, Mindful Of and Call of the Wind.

Its setting out to be a very busy year hopefully. We are planning a new single in late January/early February, followed by an EP in April and then hopefully the second album in late 2013. We are also planning on playing a few tours in the UK and Europe.

What’s the scene like up in Edinburgh, any recommendations for us?

There is quite a diverse range of music up here at the moment. Matthew Collings is one of the most interesting artists we have seen up here. Definitely worth checking out.

If you could tour with any band in the world, who would it be and why?

I suppose there is a very ways I could answer this question. Would it be great to tour with an established band who draw a huge crowd, or who would I like to see play day in day out? I’ll go with Bjork, who covers both.

Finally, if you could work with any music director, who would you choose and why?

Not quite a music director, but we have made a video for the opening track on our album ‘The floods have woke the quite sleepers’ from an old movie we found on YouTube.

It fits the song so well, but unfortunately we found out later that it was directed by Roman Polanski in the 50’s. We have been chasing permission to use it through his production company for months to no avail.

I suppose one of two things can happen now, we can either continue to chase permission and more than likely never get there, or we can just upload it and play dumb when we eventually get sued.

Any thoughts are most welcome?

Hiva Oa are planning another single late January 2013 an EP in April and finally their second album nearing the end of 2013.
hiva-oa.co.uk
facebook.com/Hiva-Oa