Hey Willpower’s Will Schwartz and Tomo Yasuda began gigging in the San Francisco area in late 2003, eventually launching US and then European tours. The pair recruited dancers to liven up their shows; first Donal Mosher and Chelsea Starr,and later Erin Rush and Justin Kelly.


In the US, hey willpower released a self-titled EP through Cochon Records in 2005 (which went out of print and was re-released as Dance in 2007). Singles for “Double Fantasy II” and “Hundredaire” were released, with music video clips directed by the band’s own Justin Kelly. 2006 saw a European-released LP titled PDA, from Tomlab. In 2006, the band also contributed to a duet version of Norweigan electronic pop singer Annie’s song “Chewing Gum. In 2007, they toured Europe with a dancer named Mecca, and a keyboardist and DJ named Christelle. hey willpower have opened for bands including Scissor Sisters, Le Tigre, and Peaches. 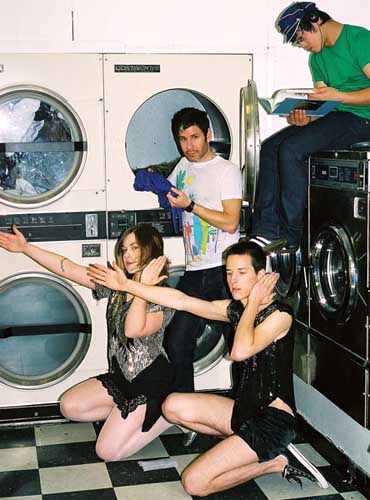 In press, Will Schwartz has spoken effusively about his love for radio-friendly, danceable pop music, how emotionally and physically he is moved by it, and the pleasure he feels from seeing an audience move around and make some noise. He has name-dropped the likes of Janet Jackson, L’Trimm, Michael Jackson, Prince, Gwen Stefani, Justin Timberlake, and Missy Elliott as influences to hey willpower’s sound. Schwartz has noted that some audiences disregard dance pop music like the kind he makes with hey willpower as being without musical integrity or value; as opposed to the sort of indie rock, post-punk music he makes with Imperial Teen. Schwartz refutes and rejects these attitudes. The music video for “Double Fantasy II” carried a John Lennon and Yoko Ono-inspired concept that urged viewers to “give dance a chance.”
myspace.com/heywillpowert
HEY WILLPOWER
+ SUPPORT
THE PAVILION BAR
THURSDAY 5TH JUNE
9PM / Â£6
TICKETS AVAILABLE FROM TICKETMASTER OUTLETS
Joe Dougan
The Stiff Kitten / Shine Productions Ltd.
thestiffkitten.com
shine.net