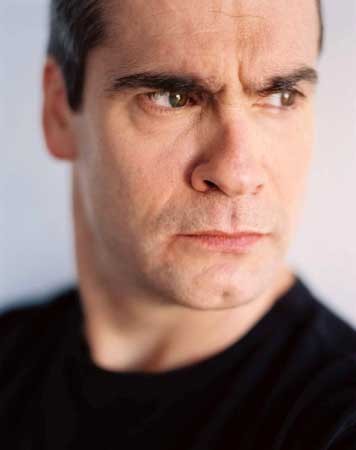 Henry Rollins joined the Southern California band Black Flag as vocalist in 1981. Upon the demise of the legendary punk band in 1986, he formed the Rollins Band and has been making records and touring the world ever since. Beyond taking the stage as a musician, Henry does speaking dates all over the world every year and, along with the band dates, has averaged over one hundred shows a year for twenty-five years. Recently he has also spent time visiting troops on behalf of the USO traveling to Kyrgyzstan, Qatar, Afghanistan, Kuwait, Iraq, Honduras, and Egypt in the process.

Never one to confine his performances strictly to the stage, Henry has performed in several movies and TV shows including Bad Boys II, Heat, and Drew Carey. Grammy nominated for both his work with the Rollins Band and the spoken word performance of his own book Get in the Van, Henry currently occupies his time chatting up heavy hitters as the host of IFC?s The Henry Rollins Show, introducing listeners to hidden gems on his weekly radio show, and running 2-13-61, a publishing company he created to release books, CDs and DVDs of his own along with the work of others such as Henry Miller, Iggy Pop and Nick Cave.?