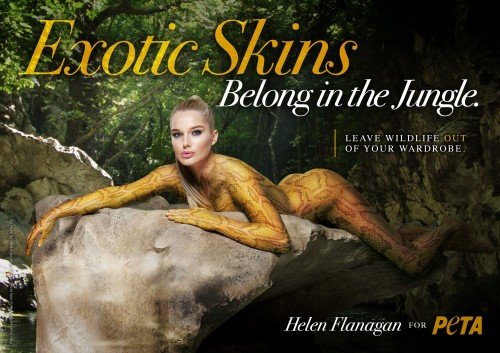 FHM’s ‘Sexiest Woman in the UK’ Unveiled PETA Advert: ‘Leave Wildlife out of Your Wardrobe’

The new ad, shot by top celebrity photographer Trevor Leighton, shows her naked body covered only in “reptile” paint next to the words “Exotic Skins Belong in the Jungle. Leave Wildlife out of Your Wardrobe”.

“Spring is the perfect time to clean the cruelty from our closets”, says Flanagan. “I know when people see PETA’s video, they won’t want anything to do with the exotic-skins industry and will join me in leaving wildlife out of their wardrobes.”

Why do exotic skins make Flanagan’s skin crawl? As shown in PETA’s exposé of the exotic-skins trade, narrated by Joaquin Phoenix, snakes, alligators and other exotic animals who are killed for their skins suffer immensely.

They are commonly nailed to trees, bludgeoned with hammers and skinned alive, and it often takes hours for the animals to die, usually from shock or dehydration.