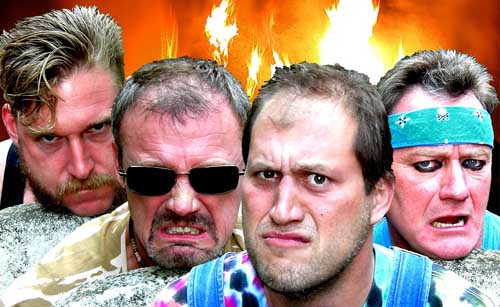 It’s a fast return to The Empire for Hayseed Dixie following their sold show at the same venue in August.

Hayseed Dixie’s started recording cover versions of hard rocksongs in their own distinctive cross of bluegrass and rock which some have termed “rockgrass”. The band’s sense of humor is evident in their name, a play on “AC/DC”.

The band has since gone on to record many of their own original songs, most of which display their trademark irreverent spirit, as well as re-interpretations of other well-known rock songs, across a series of albums, most recently “Weapons of Grass Destruction”.
Claiming to hail from the fictional Deer Lick Holler, Appalachia , the band have pretty much been on tour since 2001.

A perfect festival band they’ve been turning up on big stages at Glastonbury, the Cambridge Folk Festival, Download and Roskilde Festival.

Unlike many other bands, Hayseed Dixie actively encourages public recording and photography of their live shows. They even go so far as to provide instructions on their web page for achieving the best quality recording.
hayseed-dixie.com
thebelfastempire.com