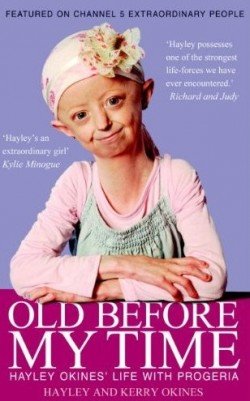 The teenager with the body of a 112-year-old celebrates the Christmas she thought she would never live to see.

When Hayley Okines unwraps her Christmas presents this year her Mum Kerry knows there is one gift money can’t buy – time.

For Hayley, who suffers from one of the world’s rarest genetic conditions progeria, is already living on borrowed time and every year her family know it could be her last Christmas.

Her condition means that her body ages eight times faster than normal.

One of only 80 known cases in the world, Hayley now has the body of a 112-year-old. When Hayley was first diagnosed with the condition at the age of two, doctors warned her mum Kerry and dad Mark that she might not live to reach 13. Earlier this month she celebrated her 14th birthday.

‘We try not to dwell on it, but we always know that every Christmas could be the last,’ said Mum Kerry, 37, who lives in Bexhill-on-Sea, Sussex with Hayley and her two other healthy children Louis, nine, and Ruby, six.

‘I have always known that Hayley would prove experts wrong and she has,’ said Kerry. ‘But I am also aware that every day could be the last I have with her. I try not to think about it but I can’t help myself. I want to give her everything she wants but there’s a fine line between making her happy and turning her into a spoilt brat.’

When Hayley was born on December 3 1997, she was a perfectly healthy baby with a thick of brown hair. But Mum Kerry worried something was wrong when she failed to gain weight.

Eventually when Hayley was one-year-old and still only the size of a three month-old baby her doctor referred her to Great Ormond Street Hospital, where after six months of exhaustive tests, a skin biopsy finally revealed her skin had an alarming lack of elasticity and doctors first suspected she might be suffering from Hutchinson-Gilford Progeria.

‘I remember asking the doctor ‘What’s the prognosis?’ To this day I still do not know why I asked that question. I didn’t even realise I knew such long words and I was certainly not prepared for the reply. The doctor explained that the life expectancy was 13 I collapsed on the floor, like someone had just pulled the carpet from under my feet.’

Coming to terms with the terminal diagnosis put huge pressure on Kerry and Hayley’s Dad Mark and at her lowest point she even considered suicide.

‘I lay in bed mapping it all out in my head. I would drive out to Beachy Head with Hayley in the car and a length of hosepipe. I thought it would be a release for us both, but when I looked at Hayley’s smiling innocent face I couldn’t go through with it. I couldn’t deny her happiness.’

Her outlook changed when she was introduced to other families from around the world who had children with progeria who were leading happy, normal lives. Kerry and her partner Mark made it their mission to fulfil all of Hayley’s dreams in her lifetime. 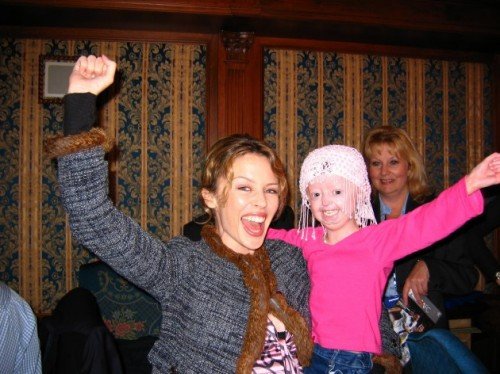 Through their charity Hayley’s Hope they raised money to take her on holiday to Disney World, Florida, arranged for her to swim with dolphins and meet her celebrity idols from Kylie Minogue and Girls Aloud to Justin Bieber. 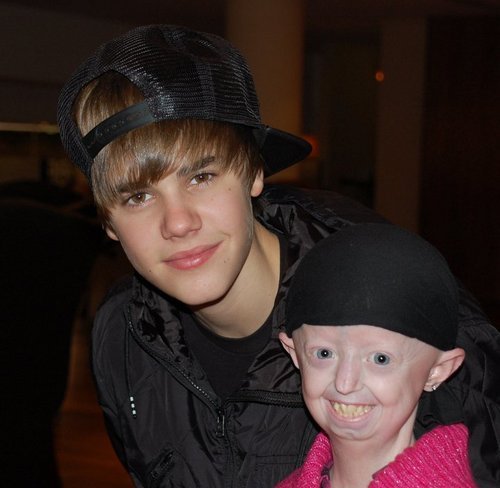 In 2007 they were offered a new glimmer of hope when Hayley was accepted onto revolutionary new drug trial in America. Strokes and heart attacks are the main killers of children with her condition.

Her closest friend with progeria died of a heart attack when she 11 years-old but Hayley’s heart is strong thanks to a pioneering drug trial which she has been taking part in in Boston, USA.

While Hayley’s heart is showing few signs of ageing, her fragile body is not holding up so well.

The past 12 months has been a challenge for Hayley who is facing up to the mobility problems associated with the very elderly and frail.

‘I don’t like not being able to walk. Having to use a walking frame makes me feel like an old woman but in my head I’m 14. The best Christmas present I could have would be an operation to help me walk again.’

Kerry added: “I have tried to give Hayley as normal and full a life as possible but it hurts me to see her in so much pain when she walks.’

‘Hayley hasn’t asked for much. But she wanted a Chihuahua puppy. So last month she got her puppy, which she named Boo after the character in Monster’s Inc, for her Birthday and Christmas. Boo has been by her side when she can’t get about.’

‘I have bought her a new docking station for her iPhone. But last year I bought her lots of games for her Wii and this year I’m conscious that she can’t play any games that require her to stand up and move about.’

Despite all her problems, Hayley remains optimistic. ‘My life with progeria is full of happiness and good memories. If I didn’t have progeria I would not have done most of the cool things I have done or met most of the cool people I have met. I am not worried about dying. They said the Titanic wouldn’t sink but it did, so that proves experts can be wrong and I want to prove the doctors wrong.’

Old Before My Time: My Life With Progeria by Hayley and Kerry OkinesPublished by Accent Press Ltd, price £9.99. ISBN: 9781908192554
hayleyokines.wordpress.com
facebook.com/OldBeforeMyTime