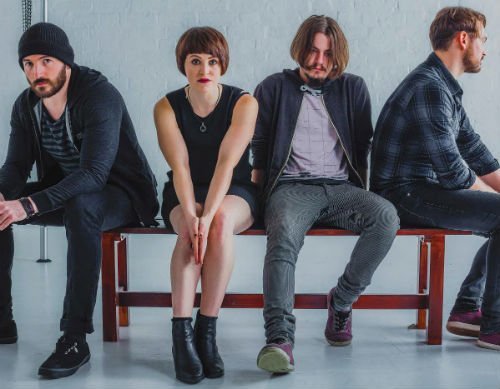 Hawk’s ‘Clock Hands’ EP is like stepping into a Guillermo Del Toro film. No, not Pacific Rim. Think early Del Toro, Pan’s Labyrinth Del Toro. You’re wandering through a surreal landscape, strange creatures peer from the shadows but you feel safe, there’s something comforting about this scenario. Julie Hawk’s hypnotic vocals lead you gently towards your destination.


Hawk – Julie Hawk (vocals & guitar), Matthew Harris (guitar), Chris Handsley (bass) and Sam Campbell (drums) – create stunning, dreamlike soundscapes that are unparalleled amongst their peers, Julie’s silky vocals scale sometimes impossible peaks and she’s undoubtedly the star of the show. The band open with single ‘Clock Hands’, a beautifully harrowing start. There will be tears. ‘Fire In A Classroom’ follows in the same vein and it’s here when you begin to key into the lyrics, written with poetic finesse. ‘Hush’ is Hawk’s crowning glory of the EP, another step into Del Toro’s Labyrinth or even a twisted Narnia – wherever your brain takes you, you won’t be the same on the other side.

Hawk’s ‘Clock Hands’ EP is a superb start for this new band, a band which will have you under their spell in an instant – addictive listening.