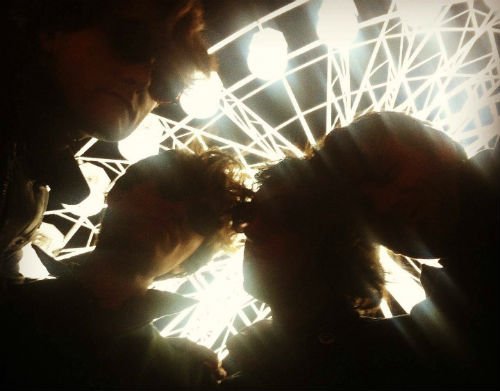 Hatcham Social share the wonderfully catchy ‘Lion With A Lazer Gun’, out 16th of December on Tim Burgess’ record label O Genesis and taken from their forthcoming LP ‘Cutting Up The Present Leaks Out The Future’ (released 3rd of February 2014 vinyl + 17th February 2014 vinyl & CD album).

Hatcham Social were facing with the difficult task of the second album…which in the end hadn’t proved that difficult.

They grabbed their tents and camped in a field outside a recording studio in Wales and five days later left with a finished album. Not that it was rushed, it just didn’t need to be fussed over.

As well as touring and playing their own gig, three of the band have also been moonlighting as Tim Burgess’s backing band.

Tim says “I love Hatcham Social as a band – and I kind of selfishly see them as my Crazy Horse, or The Band. If Bob Dylan or Neil Young was from Salford and Crazy Horse/ The Band were from New Cross”.