The eagerly awaited sixth instalment of the Harry Potter series hits cinema screens today and wizard fans are in for a real treat. Harry Potter and the Half-Blood Prince was scheduled for release in November last year but was delayed to guarantee the studio a summer blockbuster.

So after a long two-year wait, fans of boy wizard Harry and his friends Ron and Hermione can finally see what happened after the battle at the Ministry of Magic, where Harry’s godfather Sirius Black lost his life. 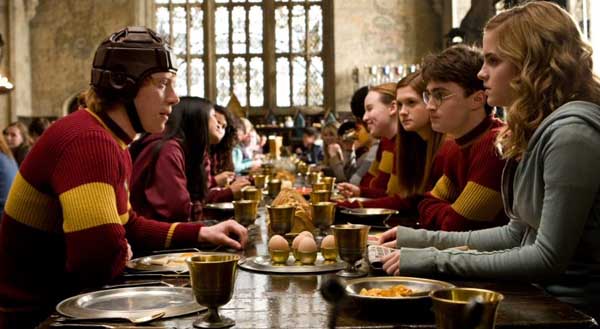 With Voldemort’s return finally acknowledged by the wizarding world, Harry returns to Hogwarts to find it may not be the safe haven he once thought.

With Aurors patrolling the grounds to protect the children, Harry, Ron and Hermione go to class as normal.

With Horace Slughorn taking over from Snape as Potions Professor, Harry can take the class and finds himself a bit of an potions expert when he finds an old text book with helpful hints and spells.

The book is the property of the mysterious Half-Blood Prince and while Hermione disapproves of Harry using the book, he continues to excel at Potions and this does not go unnoticed by Professor Slughorn.

Harry’s friendship with the Professor leads to a startling discovery about Voldemort.

Like the book, the film focuses on the character’s romantic relationships especially Harry’s growing feelings for his best friend Ron’s sister Ginny.

This budding romance coupled with Hermione’s jealousy over Ron and his girlfriend Lavender add much light-hearted relief to the movie’s more serious storyline involving Harry and Professor Dumbledore.

Taking Harry into his confidence, Dumbledore shares memories of Tom Riddle as a child and a teenager studying at Hogwarts.

Harry and Dumbledore discover how to destroy Voldemort but the Dark Lord has already set a plan in motion with tragic consequences.

Much like the end of the novel, Harry Potter and the Half-Blood Prince will leave audiences craving more especially after Harry’s ominous vow to end this fight once and for all. Life for the three magical teenagers will never be the same again.

Now all we have to due is wait for the film adaptation of Harry Potter and the Deathly Hallows, which has been split into two parts – Part I due for release in November 2010 and Part II in July 2011.

Harry Potter and the Half-Blood Prince
Cert: 12A
Out now
www.moviehouse.co.uk