Harry Hill has received a vote of support for his Fairtrade nuts from Paul Newman’s charitable foundation, the ‘Newman’s Own Foundation’. 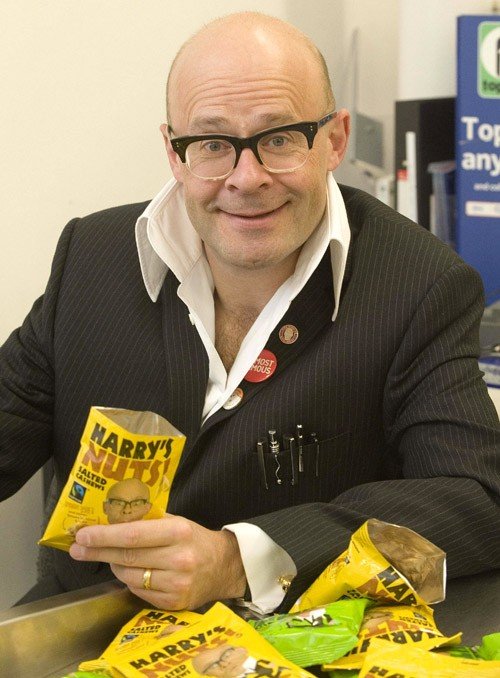 Harry’s Nuts! were developed by Harry, a Fairtrade supporter and peanut lover, after he saw bottles of Newman’s Own salad dressing at his local supermarket. Aware that Paul Newman gave all profits from the products to charity, Harry decided he would like to do something similar to help Fairtrade nut farmers.

Harry Hill is delighted with the endorsement. “My wife always wanted me to be more like Paul Newman! But seriously Paul Newman was a great example to us all. Not just a brilliant actor and icon but who knew he would make such a tasty Salad Dressing too?”

Harry’s Nuts! are available as salted peanuts and salted cashews from Tesco, Sainsbury’s, Waitrose, university cafÃ©s and other outlets. Harry is working with Liberation Foods, the Fairtrade nut company which was created for and is part owned by farming organisations in Africa, Asia and Latin America. The farmers sell their best nuts to Liberation, are represented on its board and will receive a share of profits when a dividend is paid.

Harry makes no money at all from the products which have helped to re-vitalise the African nut industry so that farmers can earn more for what they grow and build better futures for themselves, their families and their communities.

A spokesman for the Newman’s Own Foundation, which itself has donated over Â£500,000 in grants to charities in the UK and Ireland, said: “We are delighted that Newman’s Own was the inspiration for Harry’s Nuts! which benefits smallholder farmers in Malawi and Mozambique.”

As well as being good for farmers in Malawi and Mozambique, the nuts are also delicious. The peanuts have been endorsed by celebrity food writer Sophie Grigson who says, “These nuts have a very appealing creamy texture and a delicious flavour enhanced by just the right degree of salt.”