This is the statement issued by Promoters MCD & the management of The O2 regarding the Guns N’ Roses concert at The 02, Dublin, Wednesday 1st September 2010.

Despite every effort being made by promoters to ensure Guns N’ Roses would go on stage on time, they went on at 22.26hrs having been due to be on stage at 21.45hrs, support artist finished at 21:00hrs.

During the second song Axl requested members of crowd who were throwing plastic glasses containing unknown substances to immediately stop or he would have no option but to leave the stage.

He confirmed band’s wish to perform stating “we want to stay..one more bottle and we go home”.

Despite his continued appeals, having tried to continue performing for 22 minutes,Â people continued throwing unknown substances leaving artist with no choice but to leave the stage. 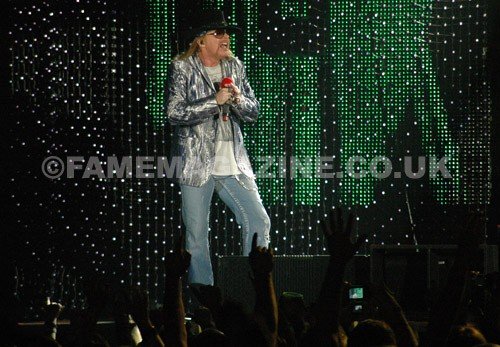 From the stage MCD Promoter Denis Desmond again appealed to audience to refrain from throwing items and stated that the band would be back on stage shortly.

Following backstage discussions Guns N’ Roses went back on stage at 23.20 hrs and performed their full set until 00.53 hrs.

While the artist has a long history for being late on stage (Slane 1992 – crowd waiting 2 hours and last weekend’s UK Reading festival), NO artist should be subjected to missiles and unknown substances being thrown at them.

However, despite this the band went back on stage after people stopped throwing items performing their full set of songs in full.

MCD and The 02 wish to apologise for any inconvenience caused due to late running of the show.