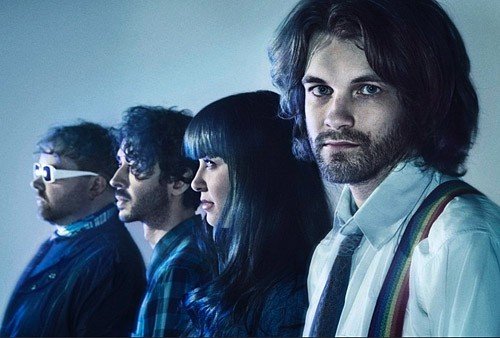 Following their two recent secret shows in London town â€“ which both sold out within minutes â€“ Guillemots are pleased to announced theyâ€™ll be playing four more similar gigs this April.

The shows are set for secret locations in Birmingham, Manchester, Glasgow and London, with the venues revealed to ticket holders on the day of the show.

The band are planning unique and exciting events for each show, like the acoustic encore in the foyer of West Londonâ€™s Tabernacle venue earlier in the month. These gigs are nothing less than â€˜must seeâ€™ shows.

Guillemots are set to release their eagerly awaited third album, â€˜Walk the Riverâ€™ on April 18th on the Geffen label. â€˜Walk The Riverâ€™ is filled with drama and contrasts – creating its own universe which seems both familiar and unexpected.

The first single to be released from the album is the freewheeling chaos of â€˜The Basketâ€™, which boasts a soaring, sweeping chorus that places pop shoulder to shoulder with a sci-fi movie vision rendered in glorious Technicolor. â€˜The Basketâ€™ is available from March 13th with an impact date of April 11th.

Here are some words from Fyfe about the video:
“This is a song called “The Basket” which is the first single from our new album “Walk the River”. We all got very excited about a fuzzy riff our guitarist Magrao started playing one day and the song came out of that.

I think in some way it’s about a mania within, caused by something external, and the conflict over whether to embrace this thing or just ignore it and crawl away into familiar comforts. It’s the most full-on, lively song on our record, and we wanted the video to throw you around as you watched it, to be full of colour and movement and a sense of constant unexpectedness.

Tom Kingsley’s treatment, set in an alien woodland, really had the sense of other-worldliness that we kept feeling while making the whole album. Tom is also a Jedi, and taught us how to propel ourselves through the air at high speed for the opening scenes, using just a pack of 9V batteries and a mental technique called “croaking”. ”