Guillemots, the four-piece band by Fyfe Dangerfield, MagrÃ£o, Aristazabal Hawkes and Greig Stewart, are set to release their eagerly awaited third album, â€˜Walk the Riverâ€™ on April 18th on the Geffen label. 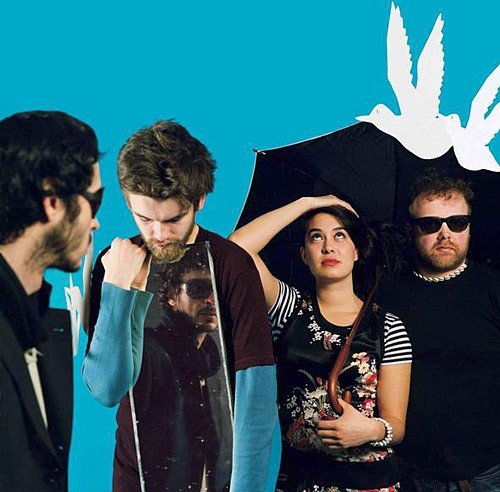 Returning to Guillemots, Fyfe and the band recorded â€˜Walk the Riverâ€™ with producer David Kosten (Bat for Lashes, Everything Everything) at Bryn Derwen Studios, a converted country manor in the mountains of North Wales.

The sessions gave birth to a startling marriage of melody and atmosphere where layers of harmony and other-worldly instrumentation give way to fragile songs of hope and loss. Fyfeâ€™s lyrical visions of a lost, stranded soul in search of a home lead a passionate and soulful band sounding at times stripped to the bone, and at others wildly ambitious and uninhibited.

â€˜Walk The Riverâ€™ is filled with drama and contrasts – creating its own universe which seems both familiar and unexpected. â€˜The Basketâ€™, the first single to be taken from the album its available to download from iTunes on 13th March.

All the twists and turns of distortion, leaps of imagination and boundless rhythms are shepherded by Fyfeâ€™s intense and intimate vocals, and the sheer quality of the melodies and performances.

“The songs had to sound as if they were being heard through the night sky”, explains Dangerfield, “sleepwalking their way onto tape. But they also needed to survive on a piano or acoustic guitar, and still grip you, still have a rawness and directness that would move you without relying on the arrangements. So it was all about trying to attain this wonky balance of sharpness and blurriness. We wanted to make a record that would completely surround you as you listened to it, fill you with warmth.”