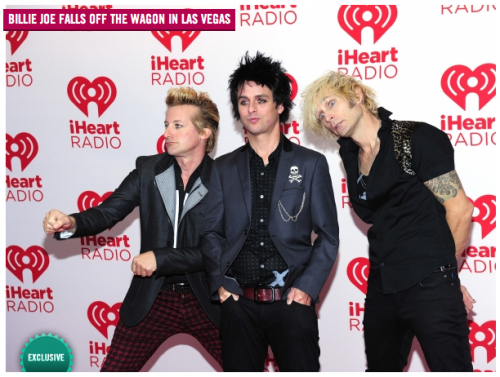 Rockstar Billie Joe Armstrong fell off the wagon while performing in Las Vegas over the weekend leading him to enter rehab, a family friend tells Celebuzz.

“He’s in rehab and his family is by his side.”

What happened in Las Vegas?

Claudia, whose son is Billie Joe’s godchild, revealed details that led to the difficult decision to get help.

“When he was in Vegas he was drinking a lot. The night of the show he had been drinking,” said Claudia, adding that her ex-husband texted her yesterday about the band’s ultimate conclusion.

“In Las Vegas there’s a lot of temptation to drink and it’s tough to be around when you’re fighting against it,” she said. “They have a new album coming out and it’s a demanding lifestyle. It’s very difficult.”

According to Claudia, the famed frontman had been sober for over a year.

“He’s my son’s godfather so it’s very hard for kids to see this happen. And it must be very difficult for his wife and family,” she said.

But she confirmed his rehab stint has nothing to do with the incident in Italy earlier this month when Armstrong was admitted to the hospital and forced to cancel a performance.

“He was actually sick in Italy and it was not from drinking,” Claudia said.
READ MORE celebuzz.com