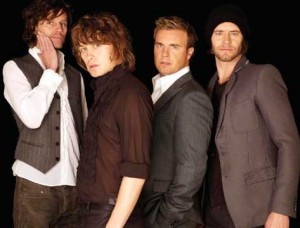 Great last minute news for Take That fans
Limited number of restricted view tickets 35 euro are on sale now
Take That fans who missed out on securing their Croke Park concert tickets after they were snapped up will be delighted with the news that a limited number of restricted view tickets priced 35 euro including booking fee are on sale now. Tickets are limited to eight per person.
Gates: 17.00 hrs
Gary Go: 18.30 hrs
The Script: 19:30 hrs
Take That: 20:30 hrs
Croke Park, Dublin this Saturday 13th June 2009.

Presented by MCD and Aiken Promotions.
What the newspapers said:
“It takes a spectacular show to fill a huge stadium…but Take That have more than delivered with their Circus tour.” (The Birmingham Mail)

“…officially the fastest-selling UK tour of all time was notable not just for its sets, stunts, eye-catching costumes and army of acrobatic extras, but for the attitude of its leading men.” (The Times)

Gary Barlow, Mark Owen, Jason Orange and Howard Donald put on clown make-up, cavorted around on unicycles and strode the stage on a giant hydraulic elephant as they kicked off the tour at Sunderland’s Stadium Of Light. (The Daily Record)

“Their Circus Live tour is simply magnificent ,the 1.2million fans who will see them during their 20-date UK and Ireland summer extravaganza are in for a special treat” (The Sun)

“They closed the show with the fantastic Rule The World. They certainly rule oursÂ…” (The Mirror)