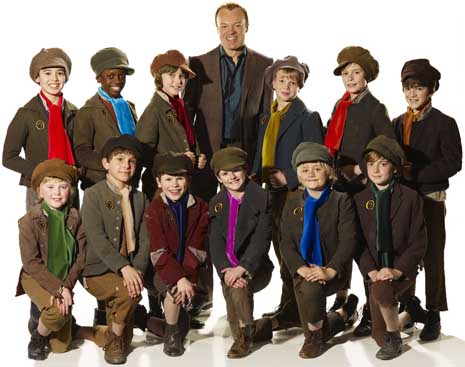 The final 12 aspiring Oliver contestants in BBC One’s new Saturday night talent search show, I’d Do Anything, are pictured together with host Graham Norton before they appear for the first time together next Saturday (29 March).

The boys are all hoping for a chance to play the role in the forthcoming West End revival of Oliver!

I’D DO ANYTHING: OLIVER FINALISTS

Alexander (11), London
Apart from becoming Oliver, Alex would like to be a barrister because he’s interested in law. He’s also a Bon Jovi fan. Alex would love to act as Oliver opposite Robbie Williams playing Fagin.

Arthur (10), Bristol
Arthur loves watching Dr. Who and Torchwood. His favourite musical apart from Oliver is Hairspray, he’s a big My Chemical Romance fan and when he’s older he wants to own his own theatre.

Chester (12), Middlesex
Wicked fan Chester loves all the performing arts and definitely wants to be an actor when he’s older. Chester likes to make his own short films but his favourite film is Stardust. He loves watching Dr. Who, Torchwood and Primeval.

Gareth (12), Londonderry
Football fan Gareth has his sights set solely on a stage career, he would like nothing more than to succeed as a singer. He loves watching Masterchef and The Simpsons and his favourite musicals are Joseph and Blood Brothers.

Gwion (11), Carmarthenshire
Gwion has his sights set on being a musical director and making the best musicals ever. He’s a Joseph fan, also loves The Lord of the Rings films and would love to act Oliver opposite Gary Oldman as Fagin.

Harry (12), Oxfordshire
Rugby fan Harry loves to watch Primeval and Heroes, and his sights are firmly set on an acting career when he’s older. His favourite musical apart from Oliver is The Phantom of the Opera.

Jonny (13), Warwickshire
Apart from acting and singing, Jonny’s ambition is to become a marine biologist when he’s older. A Hollyoaks and Horrid Henry fan, his favourite musical apart from Oliver is Wicked.

Jordan (13), Wrexham
Apart from becoming Oliver, when he’s older Jordan has his sights set on the role of Jean Valjean in Les Miserables (which is also his favourite musical) because he loves the character and music so much. He’s a Chelsea supporter and is a big fan of Ant & Dec.

Kwayedza (13), Kent
Simpsons fan Kwayedza’s first love is singing, and more than anything he wants to be a successful singer and songwriter in the future. His favourite band are Boyz II Men. He’d love to play opposite Johnny Depp’s Fagin, and his favourite musical is Little Shop of Horrors.

Laurence (11), Cheshire
Shrek fan Laurence thinks Ron Moody should have played Fagin forever, and would love to have played Oliver opposite him. His favourite musical is The Lion King, and when he’s older he wants to be an inventor.

Sam (10), Hampshire
Sam is a huge Billy Elliot fan and definitely has his sights set on an acting career. He is an avid viewer of The Simpsons and EastEnders, and apart from Oliver his favourite film of all time is ET.