Strutting the stage in a shimmery mini-dress, Potter and her band The Nocturnals brought down the house, bringing what MTV called “rock & flair to a night packed with pop hitmakers,” adding “Potter dropped plenty of jaws with her double-shot of rugged-but-gorgeous blues rock.” 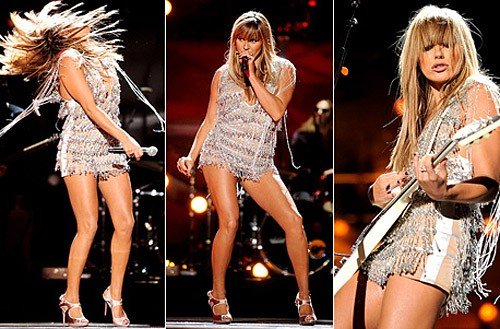 Wrote the Washington Post, “…the breakout act went to Grace Potter and the Nocturnals.”

Following Potter and the band’s performance of their hit single, “Paris (Ooh La La),” which MTV called “three and a half minutes of pure adrenalized bliss,” Ann and Nancy Wilson joined Potter onstage for an electrifying rendition of the Heart classic, “Crazy On You.”

Immediately following the show, viewers stormed and crashed Potter’s website, www.gracepotter.com and Potter hit No. 5 on Google’s Hot Searches. In addition, the band’s new self-titled release rocketed to No. 2 on the iTunes Rock Album Chart and “Paris” shot to No. 7 on the iTunes Rock Song Chart.

“It was a night to remember,” said Potter afterward. “I’m in heaven and honored to have performed for the troops.”

Potter and Heart closed out their set with a blistering version of the Neil Young classic, “Rockin’ In The Free World,” bringing the 20,000-plus crowd to a fever pitch.
www.vh1.com