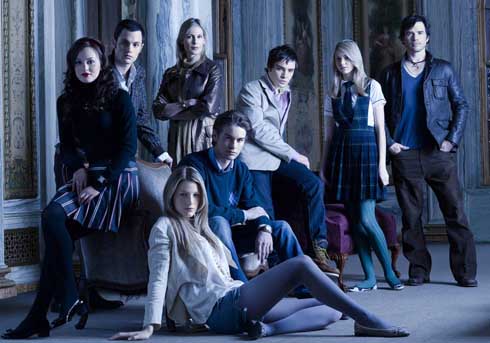 Welcome to Manhattan’s Upper East Side, where gossip rules and affluent prep-school students find themselves with the money, access and appetite to explore all the temptations New York City has to offer.

Based on the best-selling series of young-adult novels, Gossip Girl stars Blake Lively (The Sisterhood of the Traveling Pants, Accepted), Leighton Meester (Surface, Veronica Mars, 24, Entourage), Penn Badgley (John Tucker Must Die, The Mountain, The Bedford Diaries, Do Over), Chace Crawford (The Covenant), Taylor Momsen (We Were Soldiers, How the Grinch Stole Christmas, Underdog, Paranoid Park), Ed Westwick (Children of Men) with Kelly Rutherford (Melrose Place, E-Ring, The District, The Fugitive, Scream 3, The Adventures of Brisco County, Jr., Homefront) and Matthew Settle (Into the West, Brothers & Sisters, ER, Divine Secrets of the Ya-Ya Sisterhood, Band of Brothers, U-571).

The privileged prep school teens learn that Serena van der Woodsen (Lively) is back in town the way they learn all the important news in their lives: from the blog of the all-knowing albeit ultra-secretive Gossip Girl. No one knows Gossip Girl’s identity, but everyone in this exclusive and complicated vicious circle relies on her website and text messages for the latest scoop. Even Serena’s closest friend, Blair Waldorf (Meester), doesnâ€™t welcome her mysterious return to Manhattan with open arms.

One thing is for sure, when Serena was out of the picture, Blair enjoyed her time in the spotlight, and she has no intention of going back to living in Serenaâ€™s shadow. The tension between the pair isnâ€™t lost on anyone in this crowd, who live for gossip and scandal â€“ along with fashion, shopping and partying in Manhattanâ€™s trendiest hotspotsâ€¦

GOSSIP GIRL is based on the novels by Cecily von Ziegesar and executive produced by Josh Schwartz and Stephanie Savage.

Dawn Ostroff from the CW Television Network, Americaâ€™s fifth broadcast network and the only network targeting young adults between 18-34, adds â€œPeople everywhere are talking about Gossip Girl and we believe this show will continue to build. Josh Schwartz and Stephanie Savage have created an incredibly heightened-reality world that viewers are locking into.â€

US and UK critical acclaim from season 1:

â€œCarrie Brashaw, watch your back â€“ CWâ€™s Gossip Girl are looking to supplement Sex and the City as the most fash-savvy show on TV.â€ Los Angeles Times

â€œSteamy and provocative is Gossip Girl, and goes on to embrace an ambitious Web content where fans can build music videos from scenes, order clothes seen on the show or enter social networks with other viewersâ€ The Charlotte Observer, NC

â€œGossip Girl revolves around a group of privileged teens who drink, have sex, and will fight tooth and manicured-nail to be the most popular student in high schoolâ€¦â€ New York Daily News

â€œIâ€™m not saying the best show of the new season is a glossy soap aimed at bratty avaricious 12 year-olds addicted to designer labels butâ€¦ wait a minute, thatâ€™s exactly what Iâ€™m saying! Gossip Girl gives its audience what they want, adds something they didnâ€™t know they wanted and makes them hungry to come back next week.â€ The Guardian Guide, Jonathan Bernstein
gossip-girl
ITV2