Channel 4â€™s style icon Gok Wan is scouring the country to find Britainâ€™s fashion icons for his new primetime series in which he turns his attention to how to look sensational fully clothed. According to Gok, style has nothing to do with age, looks or class â€“ you either have it or you donâ€™t.

This May, heâ€™ll be hitting high streets, offices and factories around the UK in search of Britainâ€™s top fashionistas. And once heâ€™s found them heâ€™ll be asking them to strut their stuff on his traveling catwalk.

Each week, the cream of the fashion crop will win a place in the grand final with a chance to be crowned the most stylish person in Britain and to win a fabulous fashion prize.

Style supremo Gok is looking for men and women with originality and flair and who arenâ€™t afraid to show it. Do you think YOU have style? Is YOUR look a cut above the rest? Could YOU be Britainâ€™s undiscovered fashion icon? If so, prove it!

Gokâ€™s traveling catwalk is coming to a city near you in May. The first stop on the trail is CARDIFF, followed by BRISTOL, BIRMINGHAM, LIVERPOOL, EDINBURGH, NEWCASTLE and BELFAST. Turn up on the day to strut your stuff ON A CATWALK among your fellow fashion lovers. 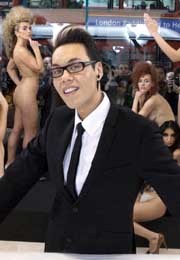 Anyone can enter – all youâ€™ll need is the confidence to pull it off. Gokâ€™s especially on the lookout for people with their own unique brand of style â€“ itâ€™s not about designer fashion or expensive price tags, itâ€™s all about individuality and not being afraid to stand out in the crowd. Britain is known the world over for its street style â€“ itâ€™s where the best designers in the world look to for inspiration, and this is all about celebrating that fact â€“ Britain has style like no other country on earth!
Those turning up to strut their stuff will be required to have photo ID (such as a passport or driving license) as proof of age and identity. No ID, no entry.

Gokâ€™s Clothes Show is set to be the weekly must-watch fashion programme with a front row seat to the best of high street and designer shopping, due for transmission later this summer.

For more information on when the travelling catwalks are coming to you, please visit channel4.co.uk/gokclothes

If you want to enter EITHER send in a photo with a few words about your style to stylish@endemoluk.com or just turn up on the day