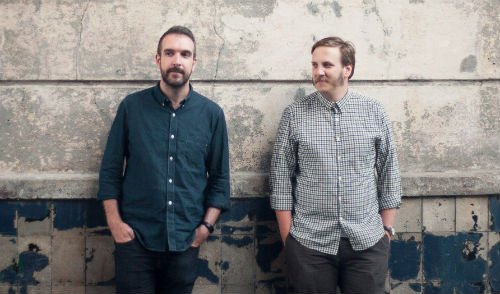 London-based duo Glyphs – Mark Walsh (vocals/songwriting) and Matt Wilkie (producer) – have just released ‘Shed Skin’, the first download track from their forthcoming EP ‘Out To Sea’ due for release on October 20th via Small Sounds.

Glyphs lo-fi electro sound exhibits moments of hip bands such as The Knife and Boards of Canada by creating an intelligent dance sound. This is further enhanced by mixing a more thoughtful, distant, dream-like feel to the vocals and lyrics that would beautifully compliment any autumnal Sunday morning stroll.

Hi how are you? Where did the name Glyphs come from?

Hi, I’m alright thanks. I wish that there was a great poetic significance to the name Glyphs, but the truth is fairly mundane. We had been bandying about lots particularly shit names for a while and not really coming up with anything that was even remotely usable. After a while my girlfriend Indira (who also does our design) had a dream we were called Glyphs and we decided to stick with it.

Great! Can you describe your sound for those who have yet to hear the band?

We essentially make pop music. Traditionally structured songs, with lots of electronic buzzing and thumping in the background.

Where do you think your music fits in today’s climate?

We don’t tend to think about the music we make fitting in with anyone else, we didn’t come to it with a master plan of the sound we wanted or how we were going to approach songwriting together, but we both have extremely varied tastes in music. I think influences from a lot of places show up in our sound, but hopefully the way they come together is what makes it original.

You are inspired by the likes of The Knife and Bonobo who are quite different bands. How is this illustrated in your songwriting?

I guess we take elements we like from a lot of different bands and genres. Sounds or feelings that we’d like to recreate in our own music. So maybe you can hear influences from these two artists, among many others, in our songs.

How does the writing and recording process work in the band?

We don’t really have a set process, a lot of the earlier songs were written in Mark’s head while he was gadding about in Asia and Australia. He came back. sang them at me, and I stuck some music behind it. The way we work now is a lot more back and forth. I’m constantly writing and have tons of bits of songs and beats saved on my hard drive, and i’ll play bits to Mark, or Mark will have ideas for melodies or vocal lines and we’ll work outwards from there.

You are originally from Liverpool. How does the scene back home compare to London?

I think the scene in Liverpool is a lot more close knit than in London. I think, similar to lots of other smaller cities, everyone in Liverpool seems to know each other. Having said that, it wasn’t until we moved down here that we started writing and performing together.

Do you think it is easier for independent bands to prosper in London or in Liverpool?

It all depends on the band really. London has is obvious the home of the industry and there are a lot more opportunities, but its easy to get lost in it all.

Any bands from Liverpool or Brixton you would recommend?

You should definitely check out our pals Rames.

You are playing some local shows to support the EP release. What can people expect from your live shows?

We’ve had a bit of a break from playing live for a while and concentrated on writing and recording. Our shows were fairly basic when were last playing out, two nerds, a mic and a laptop, but we’re in the process of making a whole new live setup at the moment, so watch this space.

What are your plans for the rest of the year and beyond?

As I said at the moment we’re working on the live set, so in the next couple of months we’ll be trying to gig as much as possible. We’re also always writing and recording so there should be more new stuff before too long.