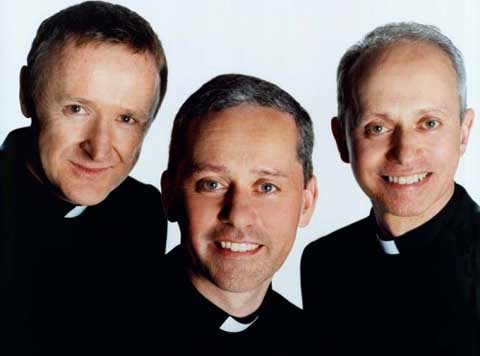 The Priests are Father Eugene Oâ€™Hagan, Father Martin Oâ€™Hagan and Father David Delargy; three practicing Roman Catholic Priests from Northern Ireland who grew up singing together while studying for the priesthood, and all joined by their shared faith and passion for music. In an amazing twist of fate, after a recording the priests had previously made landed on the desk of Epic Records MD Nick Raphael, they were signed on the spot; giving The Priests a worldwide audience to spread their music, with their debut album being released on 14th November 2008. 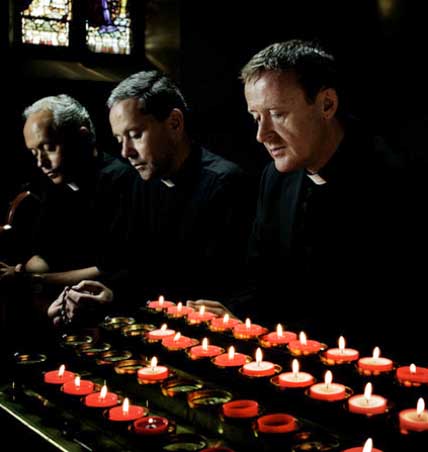 Uniquely for a debut album The Priests is being released simultaneously in more then 30 countries, including mainland Europe, USA, Argentina and the Philippines, fulfilling an unprecedented global demand. Additionally, the three have stipulated that a percentage of the proceeds from record sales will go to a charity or charities of their choice.

Featuring a collection of spiritually inspired tracks such as Pie Jesu, Ave Maria, Panis Angelicus as well as great classical arias and traditional Irish tracks and blessings, the album showcases the passion and exquisite harmonies of The Priests. The album has been produced by Mike Hedges, whose previous work includes best selling albums by U2 and Manic Street Preachers. The album, featuring the Choir of Philharmonic Academy of Rome, was recorded in Ireland and in the Choir Chapel in St. Peter’s Basilica, Vatican City. The choral arrangements are by the choirâ€™s Spanish born director, Mons Pablo Colino, the Emeritus Director of the Cappella Giulia choir in St Peterâ€™s Basilica.

Earlier this year an Irish musician recorded the priestsâ€™ voices in a demo and immediately took it to an associate of his, and it eventually landed on the desk of Nick Raphael, MD of Epic Records, part of Sony BMG. Nick was so impressed that he instantly began confidential negotiations to persuade them to sign for the label which is understood to have committed a Â£1 million investment to making the album.

The Priests grew up singing together whilst studying for their priesthood and have spent their lives using music to spread the word of God, finding time between their religious duties to sing together. Father David Delargy and Fathers Martin and Eugene Oâ€™Hagan, who signed their million pound contract on the steps of Westminster Cathedral in April, are poised to become global superstars.

The Priestsâ€™ soaring harmonies took centre stage at a spectacular concert at Irelandâ€™s historic St Patrickâ€™s Cathedral, Armagh, earlier this year which will be broadcast coast to coast on the United States PBS network this autumn. In the UK, ITV has just finished shooting a major TV documentary on The Priests following their every move since the day they signed with Sony BMG. They also featured in Time Magazine along with a photo shoot with coveted photographer David Bailey.

The Priests is not only an album of awe inspiring music but a celebration of faith, spirituality, tolerance, love and the power of the human spirit.

Aiken Promotions are proud to presentâ€¦
The Priests
Live at the Marquee, Cork â€“ 17th June 2009
Tickets on sale this Monday 22nd December at 9am
Tickets will be from â‚¬59.80 fully seated show on sale from all Ticketmaster outlets nationwide booking line no.0818 719 300 online at

Global phenomenon The Priests Debuts at Number 1 in Ireland!
The First Worldwide # 1 for the album which will be
Released in 36 countries