The UKâ€™s premiere girl group, Girls Aloud today announces a brand new arena tour for April/May 2009, in the wake of their new â€˜Out of Controlâ€™ album hitting the number 1 slot in the UK album charts and Top Ten in the Irish charts. They have confirmed live dates at The Odyssey, Belfast on 30 April and at The O2, Dublin on 2 May 2009. Nadine said â€˜ We canâ€™t wait to get back out on the road to see our fans and play the music that we love from the past albums and especially playing the new songs in those arenas next year, we look forward to seeing you all there.â€™ 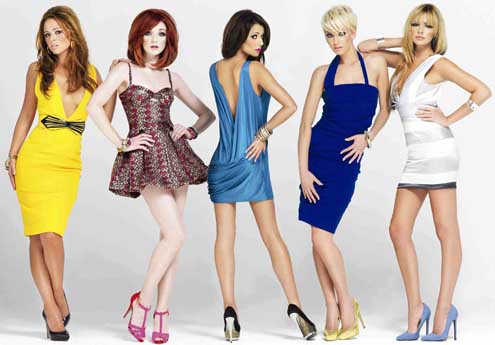 The 12-track album sees the girls continue to take pop music to places itâ€™s never been before. Six albums into their career they are trailblazers who have consistently raised the bar and changed what it means to be a girlband in the 21st century.

The lead hit single, â€˜The Promiseâ€™ sees the girls explore the lush sounds of the Sixties. Itâ€™s a sound that has already proved to be a winner in the charts and is already one of the most played Girls Aloud songs on radio. And the Sixties drive-in movie themed video has been inescapable if you have been anywhere near a music channel.

Over the course of the new album you get the sound-clash of styles that you expect from a Girls Aloud album. From the dancehall beats of â€˜Revolution In The Headâ€™ to the Eightiesâ€™s electro synths of â€˜Love Is Painâ€™ and the rollicking block-party chants of â€˜We Wanna Party.â€™Â  Then there is â€˜The Loving Kindâ€™, a song that has already sent bloggers into meltdown before anyone has heard a note. The song is a co-write with Pet Shop Boys and sees two great British pop forces come together to produce a song that is set to become a Girls Aloud classic. The drumâ€™nâ€™bass beats of â€˜Live In The Countryâ€™ flips the sound yet again. â€˜Out Of Controlâ€™ is an album only Girls Aloud can pull off – and the reason why the UK has been in love with them for so long.

â€œFor everything else that goes on around us, singing pop songs is what we do,â€ says Sarah. â€œThis is why we got into music in the first place. We feel like veterans now coming back with a sixth album but in some ways we learnt so much making this album and feel like weâ€™ve still got a long way to go.â€

‘Out Of Control’ the record and the tour- comes hot on the heels of Girls Aloudâ€™s third arena tour – the sold out ‘Tangled Up’ show and a critically acclaimed performance at the V Festival. Despite this constant stream of successes the band didn’t feel any pressure working on ‘Out Of Control’

“We were probably the most relaxed weâ€™ve ever been but we still wanted to make this album the best we have ever done,â€ says Nadine.