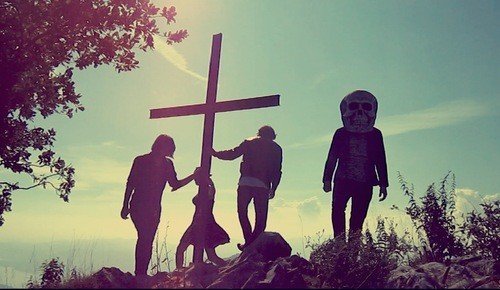 Giöbia, one of the most influential psychedelic bands in Italy, talks to FAME about their splendid album ‘Introducing Night Sound’ (out now on Sulatron records), smoking weed in their city Milan, their love for music from the 60s, synthesizers that go wroooooooo, planetariums, psychedelic lights…

First up can you tell us the story behind the name of the band GIÖBIA.

We had been playing together for some months already, when one afternoon we were smoking weed in piazza Vetra, in Milano, while trying to think of a name for the band.

Bilbo, one of our friends, had just stolen a book from a local bookstore and one of the tales in the book was called “Giobia”. So we chose that name.

Can you talk about your new album “Introducing Night Sound”?

Introducing night sound is the result of 3 years’ work and a fruitful collaboration with Dave Schmidt and Sulatron records. At the beginning we recorded and produced 16 songs.

We started looking for label once all tracks were ready. Finally during mixing we found Sulatron was interested and together with Dave we chose the 9 songs for the album. We’re very happy about the result.

It truly speaks Giobia’s music. In our previous album, Hard Stories, we had said everything we wanted to say about our more 60’s-garage-oriented side. With Introducing Night Sound instead we wanted to evolve into a more psychedelic sound. 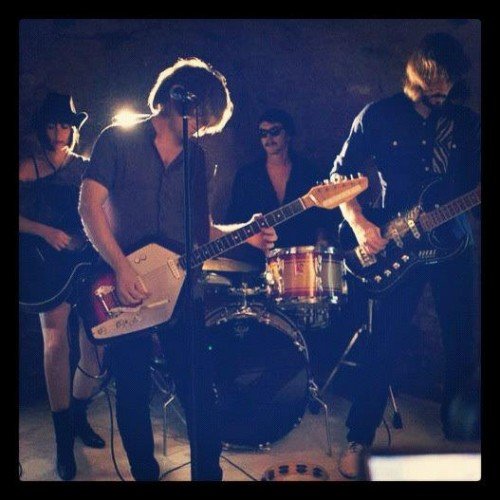 Can you describe your sound?

Kind of hard for a musician to put it down in words.. Our sound is made of vintage instruments and effects, creating warm sound pads over which we then often create guitar and bass riff patterns so intertwined and at times repetitive that the result is almost mantric.

At the same time, our musical influences are so various that our songs often come out as very different one from another, bringing together various genres in our own style.

Ultimately, what we try to do is to is to transform every song into a psychedelic experience. We look for a sound that can change the perception of things, bring the inner self to the surface and help
achieve an intense and intimate level of connection with the listener.

How do you find the fans in Italy compared to those in UK and Europe?

When you say fans, I understand people who come to our concerts. We haven’t played in the UK lately so it’s hard to say. The last time we were there, I recall a very careful and concentrated audience.

The listeners in Europe, especially Germany, are very warm and you can tell they come to shows because they really want to listen, not just to hang out. In Italy this is not always the case.

Maybe because in Germany people are more used to the type of music we play, compared to Italy…

Not sure. Every concert is a different story anyway, and we have some very good passionate fans in Italy too.

Have you any countries or venues you prefer to play in/to?

No preference really. The audience is what counts the most, together with the quality of the backline, of course. We wanna play wherever we can, in as many countries as possible.

Northern Europe, Scandinavia is the place we will be going to next, for the first time. We are also thinking about going to play in the US. The Austin Psych Fest would be awesome…

All music from the 60s, synthesizers that go wroooooooo, planetariums, psychedelic lights.

The last gig was in Terni and it was the last show of a mini tour in Italy. A good night and a good concert. After the live set we danced all night and memories are a bit blurred. First concert in central Italy in a long time. Was nice to get back and meet old friends as well.

Introducing night sound, for sure. It’s a positive moment for us in general and we hope to grow more. We’re already thinking about the next album and we like to believe that the most successful thing has yet to come.

Our label, Sulatron Records, in particular Dave & Lulu from Germany believed in us and they helped us reach out beyond our normal boundaries.

What’s coming next for GIÖBIA?

A European tour that will take us all the way to Sweden, one of our songs being included in the next “Reverb Conspiracy” compilation, more time dedicated to writing new songs.

Many people really, but if I have to say one name it would be Anton Newcombe from Brian Jonestown Massacre.