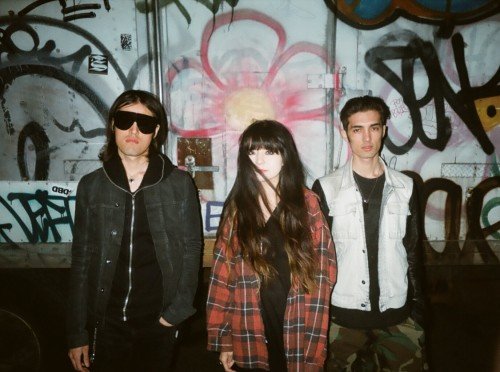 New York noise grunge trio GHXST (Shelley X, Chris Wild and Nathan La Guerra), are a band on the rise so, we caught up with them to learn (in few words) more about their 1990s influenced take on this particular music genre.
Hi how would you describe your version of grunge music?

SX: noisy, bluesy, visceral.
What made you take that musical route?

CW: we grew up with a lot of 90s american rock bands – esp. the heavy and sexy stuff. grunge is more of a feeling than a literal sound for us anyway.

Is the 1990s a decade you admire for its musical output?

What can the audiences expect from a live show during your upcoming UK tour?

Will you be expecting a difference between the UK crowds and US ones?

CW: Shelley and I met in college and had the crazy dream of moving to NYC to start a noise band. After stealing Nathan from San Diego, we started GHXST officially at the end of 2010.

Was it tough starting out, or did you find it relatively easy to get into the industry?

What have you lined up beyond this UK tour?

CW: comin’ back for some more, baby

How do you begin work on new tracks, have GHXST a system in place when writing?

CW: there’s no real formula to it, we always push some rules to get it right

Is there an act/artists that GHXST would love to work/collaborate with?