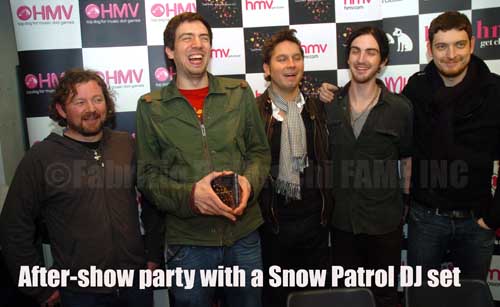 Thursday 19th March sees Northern Irish alt-rockers Snow Patrol begin a mammoth stretch of four sell out shows at the Odyssey Arena in Belfast as part of their UK wide â€˜Taking Back The Citiesâ€™ tour. With the final show scheduled for Monday 23rd March, Snow Patrol and The Stiff Kitten are delighted to announce a very special After-show party with a Snow Patrol DJ set.

Snow Patrol are one of the biggest selling UK bands this decade and â€˜A Hundred Million Sunsâ€™ follows up the 2006 Number One, seven times platinum phenomenon â€˜Eyes Openâ€™ which sold an incredible 2.1 million copies in the UK and over 1 million in the USA. â€˜Eyes Openâ€™ achieved platinum awards across the world from the US and Canada to Germany, Australia and beyond, selling over 4.5 million copies in total. Snow Patrol have dominated the UK indie rock scene since their breakthrough success with the album Final Straw in 2003. From there, Snow Patrol have taken their sound into power pop territory and even scored a place on the soundtrack to Spiderman 3 with their hit song ‘Signal Fire’. For the 40000 fans who have helped to sell out this string of shows, and also for those unlucky fans which missed out on getting a ticket for their show, this very special DJ set will allow fans to get up personal to their Snow Patrol heroes.
THE OFFICIAL SNOW PATROL AFTERSHOW PARTY WITH
SNOW PATROL DJ SET
MONDAY 23RD MARCH
THE STIFF KITTEN
10PM/Â£10
TICKETS AVAILABLE FROM THE STIFF KITTEN BAR, ALL TICKETMASTER OUTLETS
AND ONLINE FROM thestiffkitten.com