So many people dream of the new-found confidence that comes with feeling fitter, healthier and showing off a slimmer figure but modern living exerts time pressures that seemingly conspire against them. For a hectic schedule to destroy anyone’s resolve to get in shape for this summer look no further than TV star and working mother Rebecca Wheatley who has managed to lose an incredible 12 stone and all whilst maintaining her normal gruelling schedule. How did she do it?

The answer is delightfully simple and easy to achieve and you need look no further as results kick in as soon as you start following REBECCA WHEATLEY â€“ THE NEW ME WORKOUT DVD released at Â£7.99 by Fremantle Home Entertainment on 19th May 2008. 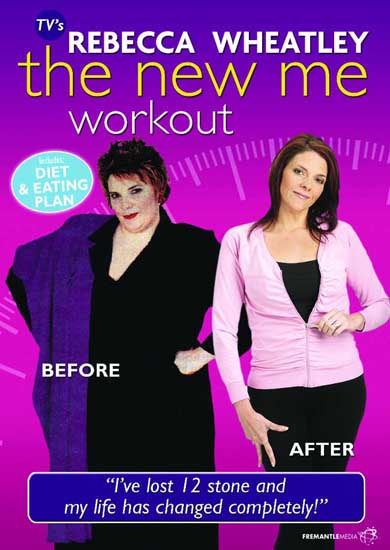 In Rebecca’s own words discover her secret to success that’s unveiled on the DVD:

“Hi there,
Have you ever seen a size 32 pair of pants??? Believe it or not that’s the size I was two years ago, when I weighed over 24 stone. Now, having lost nearly 12 stone, you may be forgiven for not recognising me! I’m Rebecca Wheatley â€“ best known for playing Amy, the receptionist, in BBC’s Casualty in the late 90s. Believe it or not the pictures on the front of the DVD are both of me!

Two years on, and here I am, literally half the size I used to be. And the strange thing is that it wasn’t that difficult. Anyone can do what I did, no matter how busy they are and no matter how little exercise they’ve done before. That’s why I’ve decided to share my secrets in my The New Me Workout DVD, which will be out just in time to start looking, feeling and living better for the glorious summer ahead.

I’ve always been a naturally â€˜big’ girl and I first started trying to lose weight when I was just six years old. But I never stuck to diets. I LOVE food and I LOATHE exercise. But one day, I decided that, for my own sake, and for the sake of my family, I needed to lose weight.

One thing I do have to say is that The New Me Workout is no quick fix solution. I lost 12 stone over a period of two years, and it was all done through sensible diet and eating. Hate the gym? Well, the fitness programme is for people like me, who’ve never done a sit up in their life, and it can all be done in the comfort of your own home. All the exercises are dead simple, but they’re really effective and they can be done separately, if you’re short of time, or as a whole work out.

Two years ago, I would never have dreamed that I’d be on stage in the West End, and I would certainly never have thought I’d be sporting sexy little knickers. But incredibly last year I was on stage in the London West End production of Bad Girls eight times a week and fitting happily into very small pants! I feel amazing and I’d like anyone else who thinks they’ll be overweight for life to have the chance of feeling this way too. Believe me, anyone can do The New Me Work Out, it has end result â€“ and they last.

See, the smaller, healthier you soon!”