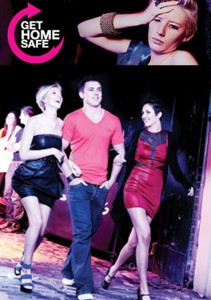 Christmas party-goers were today urged to â€˜Get Home Safeâ€™ as they celebrate the festive season in Belfast over the coming weeks.

plan your journey home in advance


donâ€™t walk through areas you are unsure of


stick with your friends


never accept a drink from someone you donâ€™t know


always have enough money to get yourself home


The annual campaign, which is led by Belfast City Council in partnership with the Department of Justice and PSNI, was launched at a city centre bar this morning. Details were also announced of a new â€˜Nite Zonesâ€™ initiative which is to be rolled out in the new year in four key areas of the city.

Speaking at the launch in the Apartment bar, Lord Mayor of Belfast Councillor Pat Convery, said: â€œToday sees the launch of our annual Christmas â€˜Get Home Safeâ€™ campaign but itâ€™s a message that is important all year round.

We want everyone to come to Belfast and enjoy what our great city has to offer, but weâ€™re taking this opportunity to encourage people to take responsibility for their personal safety when theyâ€™re â€˜out on the townâ€™.

â€œWe donâ€™t want to spoil anyoneâ€™s fun, far from it; but the Christmas period does see an inevitable increase in the number of people out and about in the city.

Simple things like planning your journey home in advance, sticking with your group of friends and drinking responsibly can help ensure everyone has an enjoyable, but most importantly, safe night out.â€

As part of the councilâ€™s partnership working a â€˜Nite Zonesâ€™ pilot project has been developed, to be rolled out in the new year.

The project is based on existing models in other major cities where designated areas will have a taxi rank, taxi marshals, CCTV and safety lighting, and emergency contact points in a bid to help disperse night-time revellers safely, as well as helping to reduce incidences of anti-social behaviour and alcohol-related crime.

Supporting the launch, Justice Minister David Ford said: “The message of â€˜Get Home Safeâ€™ is that great nights start and end with friends.

On a night out in Belfast, or any other town centre throughout Northern Ireland, consider your safety.

“If you go out with friends, go out together and stick together. Plan your journey home and be responsible with alcohol consumption.

“As Justice Minister, my ambition is to build a safer Northern Ireland, with low levels of crime and anti-social behaviour and where people feel safe in their homes, neighbourhoods and communities.

I fully support this campaign as a way of making people consider the actions they might take to help prevent late evening alcohol misuse and related violence.”

Assistant Chief Constable Alistair Finlay said: â€œOver the festive period, the number of visitors to the city increases significantly. To manage these increased flows of people, high visibility police patrols are being deployed.

â€œOfficers will be patrolling on foot, in cars and on bikes around key shopping areas, night-life spots and major car parks, using head-cams technology in an effort to prevent crime and reassure shoppers and business owners.

The campaign message will also be displayed on phone kiosks, billboards, bus shelters and in washrooms of pubs and clubs across Belfast.