A spectral club-land anthem, over sparkling synths and massed ranks of percussion, Stop And Stare is the new single from Fenech-Soler out now (on Moda Music). 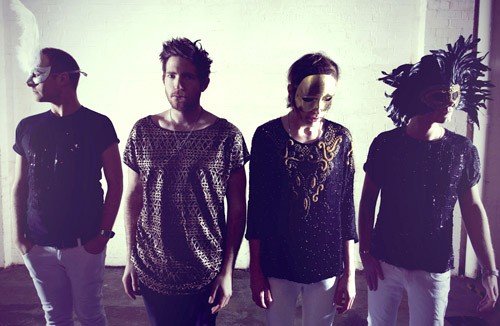 Originally conceived as a studio project by brothers Ben and Ross Duffy, with child hood friend Dan Soler – whiling away the hours of a sleepy existence in provincial Kings Cliffe – the trio combined with drummer and studio partner Andrew Lindsay to create an unlikely production powerhouse and a formidable live act.

Brewing their own brand of fantasy pop, they were first spotted by French dance don Alan Braxe, who released debut single The Cult Of Romance on his Vulture label last summer.

Introduced to London via Paris, the track picked up plays from Pete Tong, Kissy Sell Out, Eddie Temple Morris, and Annie Mac â€“ who included the Alan Braxe mix on her 2009 compilation. In the autumn, the follow-up single Lies – released and championed by Jaymo & Georgeâ€™s Moda Music label – quickly gained the support of Zane Lowe and daytime Radio 1.

JAMES BILLETT Has Crafted Intimate And Exquisitely Raw Folk On His Debut EP, WHAT WILL THEY SAY ABOUT US