â€˜Searching For The Hows And Whysâ€™ The new album released on 3rd March 2008 on Atlantic Records
Let the journey begin! 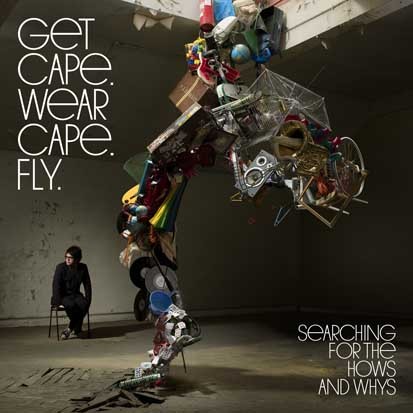 So starts the second album from 21-year-old Sam Duckworth, aka Get Cape. Wear Cape. Fly. And it really is some journey, one that adds a roomful of musicians to the laptop and guitar that populated his critically acclaimed first album, 2006â€™s The Chronicles Of A Bohemian Teenager and that quantum leaps his sound into musically broad and defiantly joyful new territory.

It marries GCWCFâ€™s proven lyrical talent with expansive orchestration, razor-sharp laptop beats, folkish, fervent guitars and even a touch of afro-beat. â€œI started making it on my computer as we were touring, but the more I got into it, the less I wanted to make a bedroom sounding record.

I wanted a tangible step forwards.â€ So he called in an orchestra and realised a new vision that is both intimate and raw. You can hear the strings emote â€“ but you can also hear â€˜em scrape.It was written on tour and in London, during a few months of intensive 18 hour sessions. Once the songs had a basic shape, GCWCF began looking for someone to co-produce it with him â€“ and seeing as Beyond Skin was pretty much his favourite record ever, asked Nitin Sawhney if heâ€™d come on board. â€œIf someone had told me three years ago that I would be recording an album with an orchestra, produced by Nitin Sawnhey I would have thought that sounded rubbish,â€ he says with a smile. â€œBut Nitinâ€™s great at finding the best character to fill the spaces in a song. I couldnâ€™t have trusted him more. I know his records inside out, we were thinking the same things.â€ The resulting album is powerfully political.

â€œOn the last album I danced around things a bit. Some of these songs couldnâ€™t be more direct.â€ Fundamentalist religion, pointless consumerism, bitter sex â€“ they all get the GCWCF treatment.
getcapewearcapefly.com