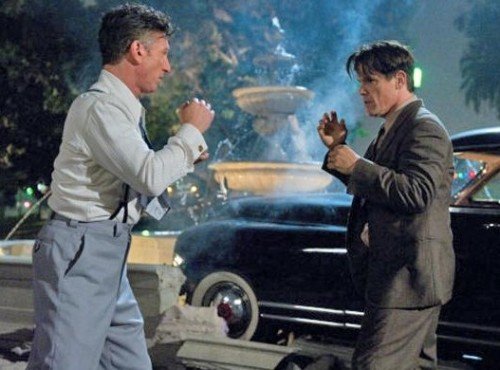 Sean Penn and Josh Brolin: two guys you never want to be on the receiving end of a fist from in a fight…

And anyone packing into movie theaters this weekend for a glimpse at Gangster Squad’s arrival will be treated to a firsthand made-for-TV brawl between both of them.

But, according to an insider on the film, those Gangster punches are no movie magic…

Dan Lin, a producer on Gangster Squad, at the Los Angeles premiere, tells Hollyscoop exclusively that Penn and Brolin duked it out for real, prepping for the production… 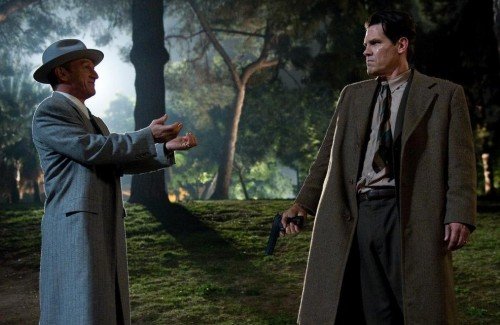 “They would even train in front of Sean’s front yard once in awhile,” says Lin on the actors’ months of hand-to-hand training.

“I mean, they really got into it cause Rueben [Fleischer, director of Gangster Squad] wanted to make the fight look realistic as possible,” Lin adds. “Sean and Josh are in tip top shape and they really train … It looks so visceral and real and makes our climax really exciting.”

Gangster Squad, a story set in the 1940s and 50s, follows the real life efforts of the LAPD to assemble a take-no-prisoners task force to keep the East Coast Mafia out of Los Angeles.

Following his headline-grabbing New Year’s incident that ended in a misdemeanor charge of public intoxication, you’d think Brolin might have paid a visit to his old pals Jimmy Beam and Buddy Weiser before squaring off with Penn, but Lin assures us that both actors did the scenes completely sober.

“No, listen,” Lin says, “in the movie they are totally ripped. If they drank too much they would be really goofy-looking so no they were good.”

Most surprising, says Lin, is how the film’s cast came together and formed a special, behind-the-scenes squad bond of their own.

“Everyone brought something different,” he says. “To see what they brought to the table and see how they really worked well together that’s really the fun in the movie.”