2009 sees Gallows return with their first new material since the release of the now-legendary â€˜Orchestra Of Wolvesâ€™ in 2006. 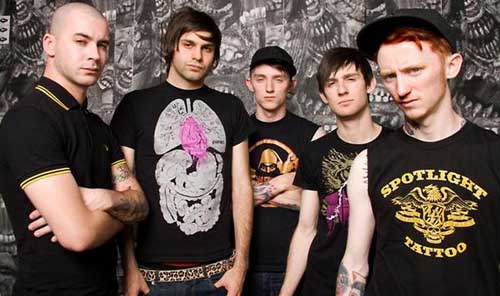 The English hardcore punk band from Watford, Hertfordshire is comprised of Frank Carter (vocals), Stu Gil-ross (bass), Laurent Barnard (guitar), Stephen Carter (guitar/voacals) and Lee Rarratt (drums). 2009 is set to be a promising year for Gallows, already they have appeared on the cover of Rocksound (Januaryâ€™s issue), and have a four month world tour lined up. They play The Limelight on Monday 25th May fresh after their new album release (untitled). 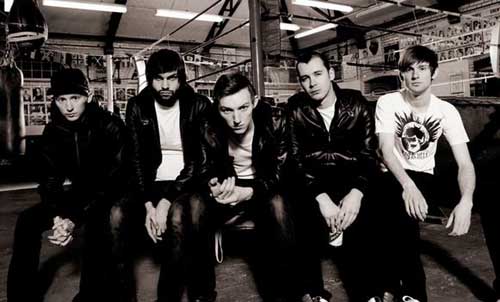 Gallows formed in 2005 from the ashes of Laurent Barnard’s previous pop punk band, My Dad Joe, and Stuart Gili-Ross from the recently defunct Winter In June and released their first album Orchestra of Wolves on In at the Deep End Records. The album caught the attention of Bad Religion’s Brett Gurewitz, who released it in the US on Epitaph Records, with new tracks including a cover of Black Flag’s Nervous Breakdown. In an interview Gurewitz named Orchestra of Wolves as one of his favourite albums of 2007 praising it as being the best hardcore album since Refused’s Shape of Punk to Come.
*Their 2007 tour included stops at the South by Southwest showcase festival, Warped Tour 2007, Download Festival, Taste of Chaos 2007, and the Reading Festival, where Frank Carter got tattooed live on-stage during the set.
*The band won the 2007 Kerrang! Award for best British Newcomer.
*Their single “In The Belly of a Shark” appears on Guitar Hero III: Legends of Rock.
gallows.com /myspace.com/gallows
GALLOWS
â€˜THE LIMELIGHTâ€™
MONDAY 25TH MAY 2009
Ticket Price:Â£10.00 (Subject to booking fee)
Doors:9:00pm
Support:TBC
TICKET DETAILS
In person:From 22 Ticketmaster outlets province wide (Including Zavvi formerly Virgin) / Katy Dalyâ€™s Bar
24hr hotlines:Tel: (NI) 0870 243 4455 (ROI) 0818 719 300
Buy online: geturticket.com /ticketmaster.ie /cdcleisure.com