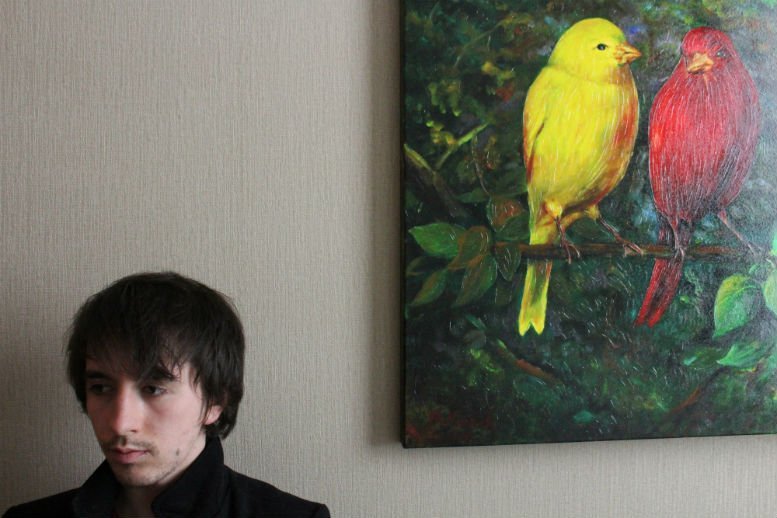 Gallery 47 – the solo project by songwriter Jack Peachey – releases ‘Clean’ (on 11th November 2016 via AWAL (Artists Without A Label) / Bad Production Records). ‘Clean’ is a collection of earnestly bittersweet tunes, all written by Peachey, accompanied by a manifesto of local Nottingham musicians…

Im grand, thank you…Please introduce yourself and let us know what you play.

I’m one of those strange solo artists who doesn’t go under their own name. My real name is Jack Peachey, but I’ve been semi-lauded and semi-made-fun-of for that name most of my life, so I wanted to get away from it a bit, hence ‘Gallery 47’. Most of the time I write songs on acoustic guitar, but recently I’ve been trying to work from vocal lines and map the instrumentation onto the melodies, because (for me, at least) I think it’s a bit less constrictive to do it that way, and in practice I’ve learned more chords because I couldn’t do the songs without learning them. I wouldn’t say I’m the best technical guitarist in the world but I’ve developed my own finger style on acoustic guitar – a kind of pincer movement with my thumb and forefinger – and luckily I’ve met some really wonderful musicians in Nottingham and London who have helped me turn this from a singer-songwriter affair into more of a full band sound.

What are the themes behind your forthcoming album Clean?

The title “Clean” comes from wanting to rid myself of the myriad not-so-cool addictions which were creeping up on me at the time. I’ve always found the world a bit of a stress and it’s all too easy to auto-medicate, drink, smoke, eat awful food etc. – I think it’s one of those challenges we all face to some extent. For me, though, it was a bit of a problem because I would feel down at being unproductive, yet I would make myself unproductive by trying to dose myself into feeling creative. Lots of the songs on the album deal with trying to grow up, progress, find your place it the world. But as most young people will tell you, it’s been a bit difficult finding a job in the last 10 years, especially when rejection letters send you into a downward spiral. Anyway, look, it’s a happy album at the end of it all and I’m fully aware that there are people out there who have it a million times harder than I’ve ever had it. It’s nothing like that. I’m not trying to protest or cry out or try to change the system, not that I could anyway. I’m just trying to articulate some of the emotions which all of this pressure can put on young people, because talking helps, and relating to other people in similar situations might help to. I’ll probably read this back later and feel like I’ve become Bono or something.

If you could write any other genre, what kind of artist do you think you’d become?

Deep down I’m such an Alternative Rock fan. I grew up on Marilyn Manson. I still really appreciate those songs, actually, even if the lyrics seem a bit extreme or unfiltered over time. I mean, I was listening to “Portrait of an American Family” constantly when writing this dissertation on Julian Barnes – all I could hear was “I am the god of fuck, I am the god of fuck”, and I couldn’t help but think that I might feel a bit too anxious to full-on-vouch for those kind of sentiments, even if deep down I consider them harmless, playful and theatrical. When I saw Paul Weller live, I just wished I had his band. I think all types of music can be great live, but sometimes I worry that my solo shows are a bit tranquil. I went to go see a psychedelic band called Sunset Nebula the other day on Denmark Street in London – this place called the Alleycat. I was watching them rocking out on stage and everyone in the crowd was really getting into it, a bit like that scene in the film “The Doors” where the band are about to get offered that deal by Shadey McShade in the suit out the back. One day I would love to work with a band like that, just be a singer in a band. But at the same time I just don’t know if my voice is cut out for that kind of music. I think it’s a bit too soft.

If you could date any artist in the industry who would that be and why?

Well I’m going to caveat this with a purely hypothetical tone because I love my wife Louise and would never want to date anyone but her! But I would love to have a cup of tea with Norah Jones because I think she’s just such an amazing talent. Someone who manages to walk the line between critically-acclaimed blues artist and multi-million-selling superstar. Mostly though I just think she comes across like a really decent, humble person, who has been hurt a bit in the past and who hasn’t let fame go to her head.

When did you first realise you wanted to become a musician?

My Dad came from a little village called “Thornley” in the North East, and everyone up there – at least everyone in my extended family (!) – took Karaoke very seriously. So as a little 7 year old, third child, competitive, wanting to out-do my brothers, I would sing “Imagine” by John Lennon or “Superman” by Five For Fighting or “My Way” by Frank Sinatra. I don’t think I ever decided though that I wanted to be a musician because I never really believed I could be one. It’s hard to tell what the difference is between someone who makes music and a musician, especially in a world of Peep Show with Jeremy and Super Hans and the Hair Blair Bunch. Deep down I really do crave validation musically, because I’m the type of person who categorizes every compliment as “They’re just being nice” and every cruelty as “See, I knew I was right”. When I got married, my wife had to insist that I put “Musician” on the register, because I’m fully aware that I don’t earn a real living. I barely get by on music. And I’m not ashamed of that, it’s just that it feels easier to call myself nothing at all than to try to account for all of the speculations which come your way with a self-diagnosis such as this.

Finally what can we expect from Galley 47 in the upcoming months?